Cross-posted with Jersey Jazzman.
How dare these unionized teachers express pride in their profession!

Teachers Ordered to Remove “Proud to be a Teacher” Signs
“Pride in Parsippany”, boasts the great township sign at the intersection of Rt. 46 and Vail Road. The teachers of Parsippany’s public school children however, are not to be afforded the opportunity to exhibit that pride according to an edict issued today by the school district’s chief administrator. Teachers have been ordered to remove a simple black and white sign that says only “I am Proud to be a Teacher” in plain block letters, followed by a smaller tag line, “Parsippany-Troy Hills Education Association”.
The message, uniformly printed on standard white printer paper, had been posted on classroom doors in all district school buildings for several weeks before acting superintendent Nancy Gigante issued a directive that they be taken down. Gigante cited Board of Education policy forbidding political actions or statements on building premises as the reason for ordering the removal of the signs.
“We view this statement as a positive message to both students and parents”, said Joe Kyle, PTHEA president. “ We have always been proud of our role as teacher, coach, counselor and guide to the children of Parsippany, and we never intended for the sign to be anything other than a declaration of that pride.”
Kyle went on to say that the PTHEA would be challenging the validity of Gigante’s interpretation of the Board policy in question. “Our members were proud to go out of our way to willingly bail out the Board after the recent Middle School disaster, and so we are astounded that a printed declaration of that pride is deemed a political action statement”. PTHEA members worked diligently to restore a workable schedule in both Central and Brooklawn Middle Schools, going above and beyond their contracted duties. [emphasis mine]

A little history is in order here:

Way back in 2010, at the start of NJ Governor Chris Christie’s War on Teachers, Christie decided that the biggest problem New Jersey faced was overpaid school superintendents. It was all a distraction from his chronic underfunding of New Jersey’s schools, fueled by his tax giveaways to the wealthiest citizens of the state. Christie needed a villain to blame for his failure to fund schools according to the state’s own law; he found one in Parsippany superintendent Lee Sietz.

Seitz, you see, had the temerity to expect that someone who was doing a decent job ought not to take a huge pay cut just because Chris Christie says he should. So Christie launched a disturbingly personal attack against Seitz for daring to making a low six-figure salary while running a large, successful suburban school district. Christie used Seitz to justify imposing a superintendents pay cap that has since chased talented school leaders out of the state.

Unfortunately, Parsippany has suffered from Christie’s nakedly political ambitions. Seitz’s replacement came into the district and immediately decided his top priority was to make sure his teachers were wearing the right sort of pants while at work.

No, I am not making this up. Click through — I dare you.

When the Parsippany Board of Education announced Seitz’s replacement would be resigning this year, there was actually applause. That’s how bad things had become in Parsippany: this past year, the district’s middle school was in complete chaos because the administration couldn’t even generate basic school schedules.

So now Parsippany is currently operating under the “leadership” of an acting superintendent who appears to spend most of her time correcting the mistakes of her predecessor. You would think this acting superintendent, Nancy Gigante, would have larger concerns than worrying whether her teachers were proud of their chosen profession. 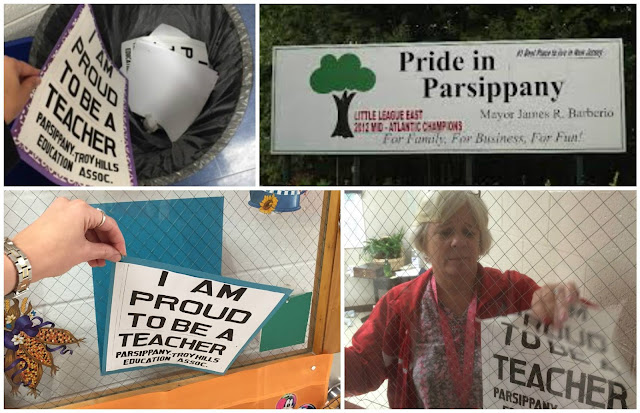 Here are Parsippany’s teachers, following orders and throwing simple signs declaring their pride in their profession into the trash.

This is what you’ve come to, America: your teachers aren’t even allowed to express pride in their profession in their own classrooms.

This is exactly the sort of school “leader” Chris Christie wanted to replace the experienced, professional superintendents he chased out of this state: petty bureaucrats who share his bullying tendencies. This is where public education is headed…

Unless we all stand up and say: “Enough.” Stay strong Parsippany. On behalf of teachers across New Jersey and the nation: thanks to Joe Kyle and our colleagues in Parsippany-Troy Hills for taking on this fight.

Send this around and let everyone know that you are:


ADDING: It’s worth pointing out that Scott Rixford, the superintendent who replaced Seitz and spent his days checking teachers’ pants before resigning this past fall, was one of the top lieutenants in Christie’s Department of Education when it was being run by Chris Cerf. Rixford was the executive director for one of the Regional Achievement Centers (RACs), Cerf’s brainchild. The RACs, fueled by reformy billionaire Eli Broad’s money, were supposed go into “failing” schools and turn them around with superior managerial knowhow.

Think about it: a guy who couldn’t even produce a schedule for a middle school was the guy Chris Cerf and Chris Christie put in charge of telling schools how to improve.
Heckuva job, fellas…
Tweet