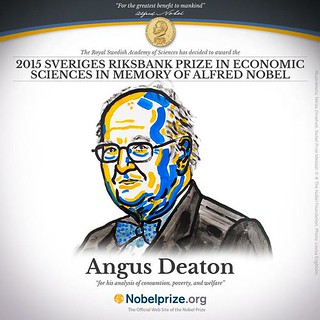 This morning, Princeton’s Angus Deaton was awarded the 2015 Nobel Prize in Economics. Deaton, born in Scotland, is the Dwight D. Eisenhower Professor of Economics and International Affairs at the Woodrow Wilson School of Public and International Affairs and the Economics Department at Princeton University. Deaton’s work centers on issues of health, wellbeing, and economic development.

“For those looking for a prize focusing on poverty, this is it. Deaton has worked tirelessly to understand the lot of the poor.”

Deaton’s book, The Great Escape: Health, Wealth, and the Origins of Inequality uses economic data to illustrate that while many in the world have gained in terms of health and well-being from the growth in GDP, groups of people have been left behind. Deaton studies ‘the determinants of health in rich and poor countries’, and how poverty is measured in India and in countries around the world.

Read more about Angus Deaton in this profile of his work released by the Royal Swedish Academy of Sciences, in connection with the awarding of the 2015 Nobel Prize in Economics.

Congratulations to Professor Deaton, and to Princeton.