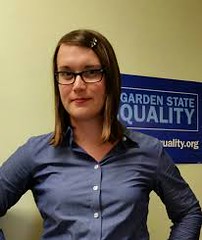 Garden State Equality announced this morning that Andrea Bowen is leaving the organization. Bowen, known to friends as Andy, made history a little more than a year ago when she joined GSE and became the nation’s first openly transgender executive director of a statewide LGBT civil rights organization.

Andy is leaving to do economic justice policy work at United Neighborhood Houses, close to her home in Brooklyn. But she will work with the GSE Board to locate a successor.

Andy’s leaving comes within days of the long-awaited release of the feature film Freeheld, which chronicles the moment when Garden State Equality found its footing and first big success in activism, when it coalesced around the fight waged by longtime police lieutenant Laurel Hester to see her pension benefits go to her partner Stacie Andree. Laurel died in February 2006 of lung cancer and she fought the Ocean County Freeholders almost up to her death, and though the (pre-marriage equality) domestic partnership law allowed the Freeholders to deny her, Hester’s determination and the people who showed up to fight alongside her and then in her name, forced them to do the right thing. In the coming film, based on an Oscar-winning doc by Cynthia Wade, Julianne Moore plays Hester, Ellen Page is Andree and Steve Carell plays Bowen’s predecessor Steven Goldstein.

Blue Jersey wishes our friend Andy good luck in her new work, and thanks for her contributions in New Jersey.

Andy Bowen had this to say:

“I’m really proud of my time at Garden State Equality where we’ve been able to make headway on ending discrimination against transgender people in health care, while addressing bullying, fair treatment of LGBT older adults, and the lack of resources for LGBT homeless youth.

Garden State Equality has a clear vision and strategy. With a dedicated board and a strong capable team, the organization is well positioned to continue achieving its goals and objectives and deliver on its commitments. Our ongoing initiatives are important and are absolutely necessary for ensuring a better life for all in the LGBT community. Garden State Equality’s most exciting work is ahead of it.”

Aaron Potenza, whose GSE work concerned bullying issues, has been promoted to Director of Programs.