Fortunately, I was outside of the country when Chris Christie sank to his latest new low:

The New Jersey governor was on CNN on Sunday, where host Jake Tapper asked, “At the national level, who deserves a punch in the face?” (Why would Christie get that question? Because he has made it known he likes to deal with bullies by punching them in the face, an approach that would work well in the Oval Office, no?) According to this story by my Post colleague Lyndsey Layton, Christie did not hesitate with a response: “Oh the national teachers union, who has already endorsed Hillary Clinton 16, 17 months before the election.”

If you’re at all shocked or surprised by this, you haven’t been paying attention to Chris Christie. The man insults teachers as easily as you and I breathe.

A few commenters have suggested that Tapper baited Christie with the question. Keep in mind, however, that Christie’s original use of “punch in the face” was back in 2012, when he was referring, once again, to the state’s largest teachers union, the NJEA.

It’s clear at this point that Christie really doesn’t give a damn about New Jersey anymore (assuming he ever did). Two of the most critical problems this state faces — pension liabilities and school underfunding — can only be solved through deliberations with the NJEA. It’s fine for Christie to get tough and stake out his positions on the issues. But when you engage in gratuitous and idiotic insults like this, there’s simply no way the groups you are lambasting are going to join you at the negotiating table.

By taking this tone, Christie has for all intents and purposes announced that he couldn’t care less about fixing New Jersey’s most pressing issues; his only concern now is how to play to the extreme-right Republican base. And at this stage in the race, sitting down with the unions would probably hurt his ambitions more than help — better to keep flapping his gums about his union hatred and hope he somehow steals the spotlight from Donald Trump.

So we can expect more of this stupidity in the months ahead. Which is fine by me: considering how unpopular Christie is in New Jersey, the more he hates on the NJEA, the better the union looks.

That said, there is one point that the NJEA and all of its members ought to push back on:

One of the ways that Christie and his apologists have tried to justify his incessant union bashing is to protest, when called out on his blathering nonsense, that he doesn’t have a problem with teachers themselves, but only with their union. Here’s an example from the fall of 2012:

New Jersey Education Association secretary treasurer Marie Blistan says public schools are the gateway for kids to reach their fullest potential, but Christie, “Has put targets on teachers’ backs. He has made teachers the enemy of the general public. He is also working very hard to separate private and public unions……….He is putting us in a position where we all need to fight for our own memberships and while we’re all fighting each other, in 14 months he’s going to come in a get re-elected. It’s his scheme to get re-elected and we cannot let that happen. We cannot let that man separate us.”

She says, “It is in fact nothing more than a fabrication of an over-active imagination and it is a disgrace.”

At the same press event, U.S. Senator Frank Lautenberg took a swipe at Christie too.

He said, “I say if the Governor wants to fire a public worker, he ought to start by firing himself.”

It bears noting that Christie has always spoken highly of teachers, if not their union. He has never said the “New Jersey Comeback” is completed, rather he says it has just begun. [emphasis mine]

“…despite criticizing teachers about being unwilling to sacrifice pay and benefits in a tough economy, he differentiates between the NJEA and its members.

“I love teachers. . . . Teachers don’t dislike me,” Christie said in a Fox News interview June 23. “The teachers union dislikes me. And there’s a real difference between teachers and the teachers union.” But teachers aren’t feeling the love. They back their union, and it backs them.” [emphasis mine]

Google it yourself and you’ll find lots of variations on this theme: Chris Christie loves and respects teachers but loathes their union. What you won’t find, however, is anyone challenging Christie to take his argument to its logical conclusion.

Because either the teachers union is doing what its members want it to do, or it isn’t. If it is, Christie is just flat out being evasive: his real problem with the union is that it’s working on its membership’s behalf, doing just what they want it to do. Which means that Christie’s isn’t just battling with the union’s leaders; he’s also at war with its members.

But if the members somehow have allowed the union to advocate for a host of things teachers don’t actually want, that speaks just as badly about those members. Does Christie think teachers are so naive that they’ve allowed themselves to be played for saps by union leaders? If so, why would he want people that gullible educating children? Or maybe he thinks we’re all just apathetic, and we’re letting the unions do whatever they want without our noticing — even advocating for things we’re really against.

That is, of course, absurd on its face. If anything, the teachers that disagree with their unions are critical because they want their unions to fight even harder for this agenda.The idea that there is some silent majority of public school teachers who actually want less pay, more pension cuts, less school funding, the end of tenure, and more school “choice” — meaning more non-unionized charter schools full of inexperienced teachers — is so ridiculous it’s not even worth arguing.

Chris Christie doesn’t hate the NJEA because it advocates for things teachers don’t want; he hates the union because it is fighting to preserve and enhance the rights, compensation, and professional authority of educators. If anything, the change teachers want from their union is for it to become more aggressive in fighting off Christie’s destructive policies.

It’s well past time for Christie to have to start owning his hatred for teachers, and not just their unions. Every time he says he wants to punch the union, we teachers should remind the public that we are the union. He wants to punch us.

Which is why he is unfit to be president, or governor, or hold any other high office. 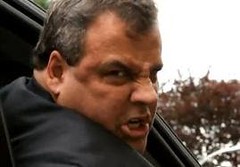 I’ll start by punching the kindergarten teachers, and work my way up!

Of course the teachers union has no literal face, and the leaders of both major teachers unions, Randi Weingarten of the American Federation of Teachers and Lily Eskelsen García of the National Education Association are women. I don’t think even a Republican candidate for president could get away with punching a woman in the face. Belittling them, yes. Berating them, yes. Taking away the choice of what they do with their bodies, yes. But not striking a woman, especially with a Hillary running on the Democratic side.

So, taking all this into consideration, I would like to step up and offer Christie my face to punch.

I am well qualified for the job. I have been a public school teacher and administrator for 45 years. I have been the president and the chief negotiator of my local teachers union. I have been sharply critical of Christie’s education policies on my blog. I deserve that punch in the face. I have earned it. Not only that, I live just a stone’s throw from the State House in Trenton, so I could meet the governor there at any time, if he ever happens to get back to New Jersey.

Have you seen Russ? He’s about as big as a tree; I don’t think Christie could reach his face.

ADDING MORE: Marie Corfield cuts to the heart of the matter:

So, why does Christie hate women-particularly women educators-so much? He says,

“Because they’re not for education for our children. They’re for greater membership, greater benefits, greater pay for their members. And they are the single most destructive force in public education in America. I have been saying that since 2009. I’ve got the scars to show it. But I’m never going to stop saying it, because they never change their stripes.”

Ahhh… if only the facts bore that out. You see, out of the 70 new business items we wrote and approved at the RA last month, the majority had to do with social justice (including poverty, racisim and discrimination), LGBTQ issues and improving educational outcomes for students. And by the way, what’s wrong with advocating for greater benefits and pay? Corporate executives do it all the time. So do the major sports teams’ players associations (aka, unions). But I guess that’s ok so long as you get to hang in the owner’s box during the games. Yes, nothing says happy, productive workers like slashing their salaries and benefits!

Fewer large companies are run by women than by men named John, a sure indicator that the glass ceiling remains firmly in place in corporate America.

Among chief executives of S.&P. 1500 firms, for each woman, there are four men named John, Robert, William or James. We’re calling this ratio the Glass Ceiling Index, and an index value above one means that Jims, Bobs, Jacks and Bills – combined – outnumber the total number of women, including every women’s name, from Abby to Zara. Thus we score chief executive officers of large firms as having an index score of 4.0.

It’s just so… unseemly for you gals to be asking for better pay. Negotiating hard just ain’t ladylike. 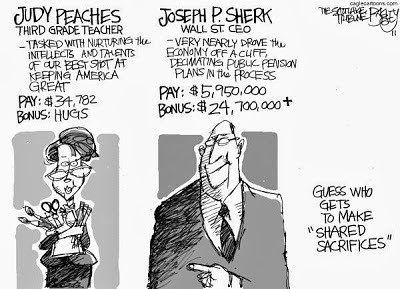