Promoted by Rosi. What say you, Pinelands fans? 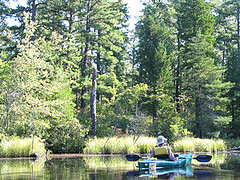 My name is Bill Caruso and I have been a long-time friend to many on this website but sadly, mostly just a lurker.  I have spent the better part of the last 20+ years working in government at both the federal and state level.  I have never held elected office instead working as a staffer implementing the policies of those I worked for.  Some of those policies I agreed with and some I did not.  So, I often chose not to comment on things related to my professional life (whether I agreed or disagreed in my personal life).

Today, I work as a lawyer/lobbyist for a NJ law firm.  I represent a diverse group of clients in both the legal and governmental advocacy arena.  But I come to you today not as a paid, hired-gun.  Instead, I write this post as a concerned citizen, avid kayaker/outdoor enthusiast and friend to the environment.  I have been an avid kayaker since my late teens.  It started as an alternative to surfing when I was a lifeguard on the Jersey Shore.  It has morphed into an exercise obsession in recent years and this past year I paddled over 700 miles in area lakes, rivers and oceans-including many paddles along the Mullica River during the winter months.

Much of my paddling is done in the Pinelands.  The Mullica River, The Batsto River and a variety of bodies of water located in the WMAs [Wildlife Manangement Areas – ed].  This part of Jersey is an absolute treasure and one that can only be appreciated by actually being there as the pictures just don’t do it justice.  I have recently begun taking my children with me and we use the opportunity to have fun, first and foremost, but they are also learning about responsibility on the water as well as our responsibility to the environment.  (I usually bring along extra trash bags to take out whatever trash we come across when we are out.

Last week, I learned from a Facebook group that I belong to for kayaking that someone has begun shutting down access to many of the dirt roads in Wharton State forest.

For those of you who are not aware, there exists a network of dirt roads that stretch for miles and miles throughout the Pinelands and Wharton State forest. Some of these date back to the pre-revolutionary war days.  Some are more recent, having been cut by forest firefighters attempting to gain access to fires in the Pines.  While there are some that have chosen to abuse these roads by utilizing significantly modified vehicles or illegal quads and motorcycles to rip up some of these trails, most of the folks I have encountered out there are simply driving through to gain access to favorite canoe put in, Geo-cache, hiking trail, swimming hole, etc. 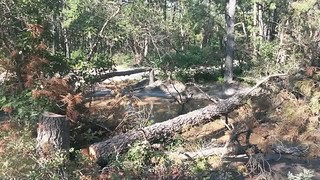 Over the weekend, we began to learn more about this surreptitious plan. Apparently these closures have been planned for some time.  The plan was developed by the Pinelands Preservation Alliance (PPA) along with State Forest officials.  Here is a link to the DEP announcement. (However, upon reading this, you would think that they expanded access.  The opposite is true.)  It is massive in its scale and the more I am learning, the more disappointed and angry I have become.  Some points I’d like to share:

1) I do not participate in destructive off-road four wheeling .  Nor  do I own a modified vehicle/quad/dirt bike etc (unless you count the two car seats in my 2008 Grand Cherokee!).  I have on several occasions driven back on some of these roads with my kayak to gain access to the Mullica River for the purpose of kayaking.

2) The PPA originally denied any part in this effort but did concede that they endorsed the plan.  (They have been getting pushback from their own membership so I see why they were careful to explain their involvement).

3) The plan was put in place to protect the forest from “Damage by unauthorized off-road vehicles”.  But, there has been little in the way of documented evidence of said damage.

4) The plan is massive in scope and will restrict access to kayakers, hikers, horseback riders, hunters, bikers etc.

5) The plan was not shared widely with any interested parties

6) The plan was not shared with local fire service personnel who were out this past week surveying the closures themselves to determine which of their roads are now blocked.

7) The volunteers have cut down live trees (a crime in Wharton) to block these roads.  Some of these trees are over 70 years old.  PPA previously denied this but has since taken a “greater good argument” justifying the killing of these trees.

8) PPA attempted to defend these closures by posting pictures of a supposed vernal pool that had been destroyed by off-roaders.  It turns out that the pool was dug by the state to fill in some damage that had occurred in an adjacent area.  PPA backed off that initial claim.

This has been a head scratcher for me.  I do not understand shutting down access to so many for the perceived harms of a few.  There must be some larger agenda going on here that we are not yet privy to understanding. At the very least, these folks are guilty of rank hypocrisy and a somewhat elitist way of thinking given that they did not reach out to the very folks who would be impacted by these closures and seek their input and understanding.

Some good news.  Since last Thursday, a Facebook group has been created by some of the folks that live in this area. It already has over 4700 members and they have raised $3000 through a gofundme account.  Their goal is to find out why this plan was implemented in this manner and how we can reverse course to grant safe access back to the people who utilize, care for and love these precious sites in our state.  While I am not an organizer of this group, I am proud to be a member.  It is an interesting collection of interests.  We have hunters and trapper alongside kayakers and mountain bikers alongside bird watchers and firefighters alongside dirtbike riders and 4 wheelers. And, you would be proud of this phenomenal citizen action.  These folks have mobilized this small army to start photographing some of the destruction caused to close these roads, shared with local news media as well as started calling state and local elected officials.  I am told by some of our friends in government that this is starting to make a real difference.  True democracy in action which is really the antithesis of how this plan was concoted and implemented.

After consulting with Rosi and Steve [Deciminyan], I thought I would bring this to this group’s attention.  First, because there is a collective group of very well-educated and very well-intentioned individuals here and I seek your advice and counsel.  Second, many of us live and play in this area and I wanted to make you aware.  Third, most of us on this page have fought for many progressive causes. The environment being one of those causes.  I have many friends who are part of the official organizations that lobby on behalf of the environment, including PPA. I have tremendous respect for all of these folks.  But, even though we support their good work, we must also police our own when things go awry.  This plan seems far wider in scope than necessary, ill-conceived and poorly executed, less than transparent and potentially hypocritical in that we are killing trees to save the forest?  From what?

Thanks so much for taking the time to read this.  If you’d like to learn more about what is going on, I’d invite you to check out this Facebook page: Motor Vehicle Access Of NJ State Land (which will be merging soon with another page with another several hundred followers, totaling nearly 5,000).  It was created as a closed group so you will need to request permission to join but my understanding is that everyone is welcome.  With the permission of this site’s responsible parties, I will keep you all updated on how this progresses.