Attending a Netroots Nation conference is akin to drinking from a fire hose. There’s so much going on that it’s difficult to absorb a lot of it.

The last Netroots that I attended was in 2013 – a year that only New Jersey and Virginia had races that had some sort of national attention. Both winners were national figures – Chris Christie for his mouth and Terry McAuliffe for his close ties to Bill and Hillary Clinton. Barbara Buono was there as the progressive challenger to Christie, so there was a good amount of New Jersey interest. This year, Christie is just another gnat in the clown car, and there’s not much New Jersey interest or presence here. But that doesn’t mean that progressive issues are not important to Blue Jersey readers or New Jersey residents.

This year’s conference is in Phoenix. That was not a non-controversial choice and some long-time supporters are not here, protesting the actions of the repressive state government. But Phoenix was chosen to emphasize this year’s theme – comprehensive immigration reform. 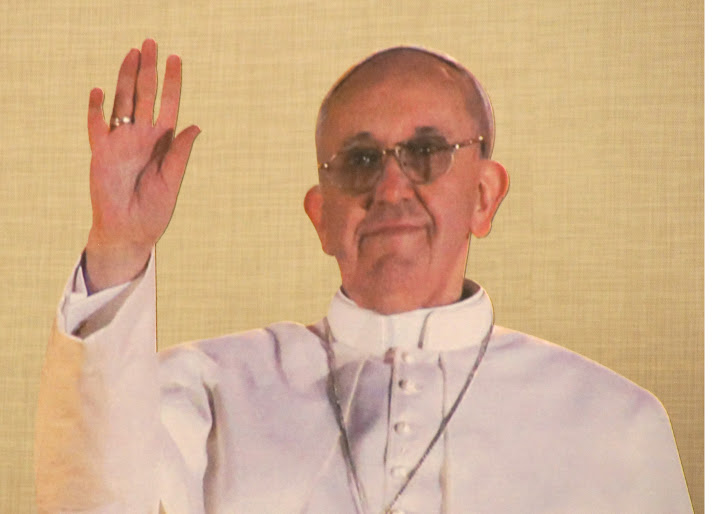 One of the important political figures who is not present this year is Pope Francis. But he was mentioned in several of the sessions I attended. At a talk about the future of Dodd-Frank Wall Street reform legislation, the speakers invoked the Pope by quoting his line, “The financial system should serve and not rule.” There was quite a bit of talk about the Pope’s upcoming visit to Philadelphia at the Pennsylvania caucus (there being no New Jersey caucus, I crossed the Delaware River for this one), and at a session on religious freedom, people were invited to have their photo taken along with a message to the pontiff.

The Dodd-Frank session was the first of the morning sessions I attended, and with Elizabeth Warren scheduled to speak tomorrow, there was good attendance. Dodd-Frank recently celebrated its fifth birthday, but it is under attack by the GOP and Wall Street. Since its inception, Dodd-Frank has returned $10 billion to consumers. It’s no wonder that as speakers pointed out, lobbying spending by the financial industry has increased to $1.4 billion under Dodd-Frank. Wallace Turbeville of Demos said that Dodd-Frank did not fundamentally change the way Wall Street and the banks do business, and there needs to be a major transformation in this area.

One takeaway, from Lisa Cody of SEIU, transcends the particular issue at hand. She urged activists to cultivate good relationships with investigative reporters and public officials in order to help spread the word and do the actions needed for progressive change. Over three trillion dollars are invested in municipal bonds across the country. Cody pointed out that when it comes to structuring municipal financing, Wall Street’s goal is to design products to maximize fees, not necessarily keeping the interests of the taxpayer at the forefront.

As previously noted, I attended the Pennsylvania caucus. Living in the greater Philadelphia area, I have a peripheral interest in Keystone State politics and have done come canvassing in Philadelphia for my friends there. In addition to the Pope’s visit this September, Philadelphia is of course the venue for the 2016 Democratic National Convention and progressive organizations are working to ensure that they have a voice at that event. Even though these conventions highlight the positive aspects of the host city, Michael Morrill of Keystone Progress said his group will be organizing a progressive tent for bloggers at the convention, as well as a poverty tour for delegates to point out where action still needs to be taken. 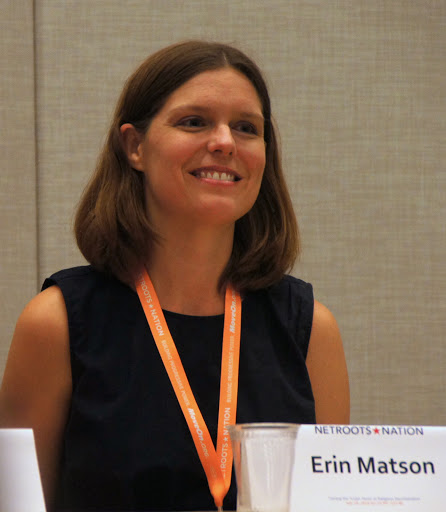 One of the best-attended breakout session that I observed was a panel on religious freedom and how the right is co-opting the First Amendment to push for discrimination against the LGBT and other communities – or as one panelist put it, the right’s “weaponizing of religion.” Erin Matson, an advocate for feminist causes, decried the fact that there’s indifference within the progressive movement on funding for abortion. While the movement fights for abortion rights, she pointed out there seems to be a lack of enthusiasm to have funding for this important aspect of women’s health included in federal programs. On birth control, she contended that even though President Obama has found ways to work around things like the Hobby Lobby decision, these “fixes” are detrimental to the social justice movement. Matson also urged more conversation between progressives of faith and secular progressives.

Even though we’re still five years away from the next national census, the 2020 redistricting was another hot issue. It was reported that Republican interest groups have already committed $120 million to influence the redrawing of congressional and legislative districts in their favor.

At a panel on redistricting, Michael Sargeant (left, in the photo below), Executive Director of the Democratic Legislative Campaign Committee (and a native New Jerseyan), introduced Action 2020 – a program to work toward more fair allocation of districts.

He pointed out that in the last congressional election, while the Republicans won the House, Democrats actually garnered 1.5 million more votes than the GOP did. This anomaly is also common in state legislative districts, forcing a disconnect between the will of the voters and those chosen to represent them. At this session, state legislators from Arizona and Colorado discussed the growing influence of Latino voters, fitting right in with the main theme of the conference – immigration reform.

Lest you think Arizona is filled with right-wing gun-toting folks like former governor Jan Brewer and Sheriff Joe Arpaio, you need to meet Phoenix Mayor Greg Stanton. Mayor Stanton delivered one of the first night keynotes, and proudly pointed out that the majority of the Phoenix council is progressive. “There is not a city in America that would benefit more from comprehensive immigration reform than Phoenix”, he said. Equal pay, LGBT rights, and accessibility to affordable public transportation are among his priorities.

That’s a tip-of-the iceberg summary of Day 1. Day 2 includes remarks from Senator Elizabeth Warren, and on Saturday we hear from Bernie Sanders and Martin O’Malley (but not Hillary Clinton).