So much of what I have always liked about Rush Holt was true – maybe even moreso – of his mother, Helen Holt. She died Sunday in Boca Raton of heart failure. She was 101, almost 102.

Back before I worked for him, Rush Holt used to tell a couple of stories about me at DFA events I’d organized. One was about when we first met him, pulling the car over on Main Street and leaping out at him with, “Are you a candidate?” when we spotted an unfamiliar blue suit with a clipboard. For him, the story was about how alert we were. For me, the best part was his answer, a sincere little speech about how he had the right to collect signatures out in public. From then on, Rush Holt’s earnestness was one of my favorite things.

I don’t come out as well in the other story, but that was fine with me. Because I was wrong, and he was right. Big-time. After Holt lost the 1996 CD12 primary (to Lambertville mayor Dave DelVecchio, who lost the general to GOP crooner Mike Pappas, who Rush beat in ’98), I was helping run a geographically-challenged leg race in LD23. Holt called me up to chat. We met on Route 31 in one of the Amwells, and talked in front of a WaWa that’s now a bank, leaning against my car sipping a coffee (me) and a tea (him). He told me he was going to run for Congress again, and win. I sighed. And told him he should really start lower on the food chain. Because after all, the House is shooting pretty high for somebody who’d never been elected ever.

The first time I met her was at the 1998 Mercer County Dem Convention, in some glorious old lecture hall. I went upstairs to the gallery, sat next to an elegant woman in a fussy blue suit. We chatted; she didn’t tell me her name. Carl Mayer was expected to walk away with the nomination; he spoke like a firebrand and spent his own millions. He spoke first. As Rush Holt climbed to the lectern, she whispered, “Watch this.”

Rush Holt, the earnest scientist who spoke in paragraphs, stood up and made a speech like Howard Dean was able to make a few years later, and Bernie Sanders can make now. But it was the first time I’d heard it, and it blew up the room.

He talked about how many people wrote small checks, how many people collected signatures, walked with him, introduced him to their friends. And he described a people-powered race, a movement.

I turned back to the lady, who extended her hand. “How do you do? I’m Helen Holt, Rush is my son.”

Helen Holt is the first woman who ever served in a statewide office in West Virginia’s history. But before then, she was a science professor with both bachelor’s and Master’s degrees from Northwestern University, who also studied at the Marine Biological Lab in Woods Hole on Cape Cod, and set up the science library at Stephens College, the women’s school where began her studies. Her Master’s thesis was on the artificial insemination of the Japanese salamander, after she’d been urged that women didn’t study zoology … because working with animals was messy.

In 1940, her students sent her photo in to Life Magazine for a photo spread about teachers. Sen. Rush Holt was the youngest person ever elected to the U.S. Senate, Washington D.C.’s “most eligible bachelor” and the model for Jimmy Stewart’s character in Frank Capra’s Mr. Smith Goes to Washington. He saw that and his sister arranged a meeting. They married, but she was widowed early; Holt died in 1955, some years after he lost reelection. There were three children.

She finished out his term in the WV legislature. Then, she was appointed to a vacancy as WV Secretary of State. She lost her reelection, but was appointed WV’s Asst. Commissioner for Public Institutions, which gave her a role overseeing log-term care facilities and the women’s prison. President Eisenhower appointed her to run a new program at the FHA to set standards for long-term care facilities, and provide insured mortgages for the construction of nursing homes that met those standards. Holt, who became a leader in advancing housing programs for the elderly, was reappointed to positions at the federal HUD by 6 subsequent presidents. 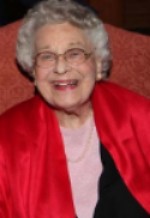 I didn’t know much of Helen Holt’s resumé when I went to work at Rush Holt’s successful second run for Congress in 1998. Most of the campaign was off in quarters nearby, but the Finance operation where I worked was at Rush’s home, where his wife Dr. Margaret (Annie) Lancefield and mother put up with our intrusive presence in their dining room, home office and kitchen. Mrs. Holt remembered me.

Back then, putting together a mailing was a big vol operation which I would sometimes supervise. Helen Holt would sit around the table with all of us and pitch in. She was then in her mid-80s. Somebody else might have found it vexing that in her presence, labels must go on straight and not be slapped on, and stamps were to go neatly in the upper corner.

Those were her standards, to do whatever she was doing as well as she could see it done. It extended to stamp placement same way it was exercised in helping to drive federal policy. She was a stickler, that one, and I liked her. Very much.