Chris Cerf, no fresh face, will be Newark’s next School Superintendent

“Former NJ Commissioner of Education Chris Cerf has a history of underfunding, dismantling, and making money off of the very institution he now wants to now lead.” 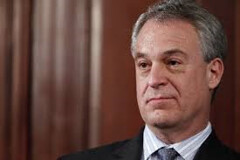 The effort of the people of Newark to shuck off state control of the city’s schools, and the privatizing schemes and efforts to turn its children into commodities that go with it, is and has been extraordinary. Despite efforts to diminish, frustrate or wait out the protest, it persists. Multiple layers of Newarkers support the effort – parents, students, community groups, Board of Ed members, clergy, teachers, and the city’s educator-mayor Ras Baraka, who made local control his signature election issue. Resistance has made national news, and is social media-savvy. Other American cities are watching – particularly minority majority cities, whose kids are prime targets for edu-tycoons. Inside New Jersey, there’s tracking of the Newark resistance, too. At a rally yesterday against appointing Cerf to succeed the much-scorned Cami Anderson as superintendent, both Camden and Paterson advocates showed up, two cities whose schools are also under state control. Residents of Montclair, where Cerf lives, also showed up. Resistance is growing, statewide.

For many months, the immovable force Chris Christie was the only thing standing between Cami Anderson and oblivion as Newark’s schools chief. During the years-long protests, Anderson was re-upped and given a raise, a tremendous slap to Newark residents. But the press coverage – particularly of Cami’s personal buffoonery against brave student resistance – became a distraction. And Christie’s attention’s elsewhere anyway. So, bye-bye Cami. She was frankly sent to prime the state’s largest district for privatization, and though she was bad at even that – sloppy, disorganized, unprofessional

and so fearful of being upbraided by parents that she hid out somewhere else for a year’s worth of board meetings – she costs students and families big.

Now Newarkers are told that their mayor and Gov. Christie have reached agreement to begin a process of returning control back into local hands. With Cerf to manage the process under Baraka and Christie and a commission whose deciding majority is charter proponents and business people. Not educators.

And Cerf? Chris Cerf is no fresh face.

He had everything to do with what has already gone wrong for Newark Schools since Christie and Cami. The ties are well-known; for this post I’ll quote Mr. Alston, since his entire post is worth your read:

Chris Cerf’s firm, Global Associates, was paid $500,000 to give Cami Anderson her blueprint for running Newark’s schools. Chris Cerf left his post as New Jersey Education Commissioner to to join Amplify, a company that had – under Anderson –  a $2 million contract with Newark’s public schools.

Worse, as recounted by Alston, is how Cerf – now charged with the process of returning Newark to local control, has a history of interfering just 4 years ago with Newark regaining local control based on their own high state evaluations  – – – and using Cami to do it.

Cerf and Cami are allies, in their New Jersey history, and their devotion to turning public schools into charters.

Mayor Ras Baraka, who I respect greatly, joined the anti-Cerf protest, but didn’t indulge in any of the anti-Cerf rhetoric. He spoke of local control, and called critics of the local control deal ‘crackpots.‘ It’s too early to know the track the return to local control will take, or whether the charter forces inside the state’s education infrastructure will undermine any future handover back to Newark. There are already some victories – Baraka was elected against a candidate heavily funded by charter proponents, Cami is gone, the vote this morning was not unanimous, discussions have begun for local control. The Newark residents will determine for themselves whether that’s glass-half-empty or half-full.

The vote this morning was close, 6-4. And I think Newark’s parents and student leaders, clergy and community groups, teachers, it’s elected reps and its educator-mayor will be vigilant.