No teleprompter – and other shiny objects

We see today that Chris Christie will be ditching the teleprompter at his 2016 announcement Tuesday at Livingston High School.

I guess this is the voodoo people like Christie and his advisors Mike DuHaime and Maria Comella practice on Republican voters. They assume their voters are so damn stupid and gullible that some nonsense about not using a teleprompter really means Christie is “Tell it like it is” (campaign theme alert!) and not the habitual liar (eh, Tom Moran?) he actually is.

As if self-righteously complaining that President Obama uses a teleprompter for major speeches is the shiny object they can dangle before Republican eyes to get them to ignore the fact that Christie usually uses a teleprompter, too.

Maybe Republican voters really are that stupid. But I doubt it. Just in case, news flash, cats ‘n kittens: People who give big political speeches (including presidents and wannabe presidents) have staffs that hone their message and write their big speeches, and they read them off teleprompters. And it doesn’t. mean. anything.

Know what you get when you don’t use a telepromter? Eleven minutes of Clint Eastwood talking to a chair. 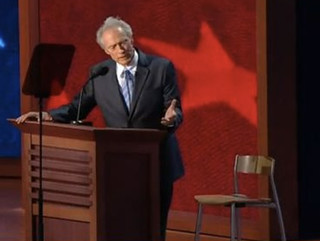 When the chair starts talking back, it’s time to run far, far away.
Tweet