Cami out, Cerf in

For last three years the Newark Students Union has been fighting against the defunding and privatization of our education. Cami Anderson’s resignation does not put an end to our fight. We must continue to fight for democratic local control in our city. We don’t want former commissioner Cerf as the superintendent of NPS, we want the right to choose who will lead our schools. This is ‪#‎OurNewark‬

I don’t know who’s going to say it better than that.

Education Commissioner David Hespe confirmed today the rumors that Cami Anderson will step down by July 8. Following her in will be former Commissioner Chris Cerf, assuming approval by the state Board of Education, and yes you can assume that.

Hespe said pretty things about Anderson, but the reality is that she has been a disorganized disaster who lacks the guts to even to deal with questions and failed even to be professional enough to attend school board meetings – for a year! – because she might hear something she didn’t like. She leaves with a wad of your money and was allowed to leave with her “reputation” intact at least as far as the reformy circles she travels in. She’ll pop up in another city, and begin dismantling public education there. And if you’re a minority-majority city, watch your back, you’re most at risk. 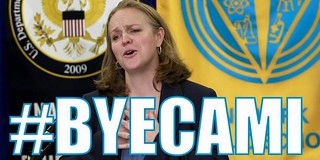 NSU, who just elected new leadership days ago as the city’s senior class prepared to graduate, reminds us that it was exactly one month ago that 2,000 high school students from all over the city walked out, and marched to City Hall. Newark is a city that has already put mighty effort into shucking off the Christie-installed Anderson – its students, neighborhood organizations, teachers, and parent groups. And Mayor Ras Baraka, an educator by profession, who made regaining school control from the state his signature issue.

Cerf is not an improvement. This will be a personnel change; whether there’s any more substance to it than that remains to be seen.

Jersey Jazzman will have more on this, I expect.