The Reading Zone points us to a video of Chris Christie out on the campaign trail doing what he does best: bashing teachers.

Q: Which do you regard as a bigger threat to the nation: ISIS, or our K-12 education system.

We Jersey folks have become used to this: after all, Christie has compared teachers to drug dealers, told students their teachers don’t care about their learning, and excoriated teachers for using pronouns to describe their students. No, I am not making this up.

There are three reasons Christie engages in such juvenile, unpresidential behavior. First, he has a personal beef with the New Jersey Education Association, the state’s largest teacher union. The NJEA  has not backed down to his bullying, and that pisses him off to no end.

Chris Christie’s record is quite clear: he is a truly horrible governor. I’ll admit that, for once in my life, I am looking forward to an extended presidential primary season, just so I can watch all the other Republican candidates repeatedly recount his disastrous reign in Trenton. Third — and I do not say this lightly, but there is no other conclusion I can come to after watching the man closely for over five years — there is something seriously wrong with Chris Christie:

I mean, what kind of a leader behaves this way? Heaven forbid the man ever obtains high office, but if he did: would he yell at hecklers while visiting a foreign country? Am I the only one terrified at the thought of a man this intemperate having his finger on the nuclear button?

America, Chris Christie is simply not qualified — by his record, by his actions, or by his character — to be the leader of the free world. We in Jersey know this, and it’s increasingly clear that the rest of you know this as well. Still, because Christie is so self-deluded that he thinks he has a shot, you will be subjected to his incessant teacher bashing for the next year.

Christie talking point: We spend too much in urban districts like Newark, Camden, and Asbury Park, but those districts are “failing.”

Reality: First, a-contextual complaints about school spending are idiotic on their face. 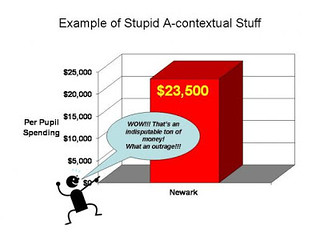 Even high school students understand that children growing up in poverty benefit from increased resources, and that a large and growing body of research shows that school finance reform can make a meaningful difference in student outcomes.

New Jersey consistently ranks as one of the best-performing statewide education systems in the nation. This is due, in part, to a commitment to school funding equity, which the evidence shows has helped lower-income and minority students to raise their performance on test-based measures. Unfortunately, New Jersey has backed away from its drive toward funding equity under Chris Christie, with increasingly disastrous results.

It’s also worth pointing out here that the three examples Christie gives — Camden, Newark, and Asbury Park — are his responsibility. The state has controlled Newark’s schools for two decades. Christie took over Camden’s schools after the district had been under a state fiscal monitor for years. Asbury Park has also had a long-time fiscal monitor, who reports to the Christie administration.

If Chris Christie thinks Newark, Camden, and Asbury Park schools waste money, he should blame himself, because he is directly responsible for their management.

One final bit of screaming hypocrisy on Christie’s part: even as he complains about spending in school districts with many at-risk children, he sends his own children to private schools that spend far in excess per pupil what those districts spend.

Reality: As I’ve said before, blaming K-12 education systems for community college remediation rates is ridiculous when the majority of students in community colleges have been out of high school for at least several years.

As Rowan’s Eric Milou points out, the placement tests for community colleges set unrealistic standards. How well does anyone think Chris Christie himself would do right now on an Algebra II test, where he’d have to apply the quadratic equation and use logarithmic and exponential functions?

I must admit, Christie isn’t the only one to engage in the college remediation nonsense. But that he would do so when he is the governor of one of the highest-performing states in the nation is incredible.

Reality: This shows as well as anything how little Christie knows about how schools actually work. Teachers with high-quality training have known for years that student-centered instruction is an important counterbalance to teacher-centered instruction.

The only teachers who engage in rampant teacher-centered instruction appear to be those who receive low-quality training, like that found at the Relay “Graduate” School of Education, a program run by relatively inexperienced teachers, with no scholars of education on faculty, who tell their trainees to treat their students like trained seals.

Christie has allowed this style of “education” to proliferate in his state, even as he decries teacher-centered instruction. The mind boggles.

Christie talking point: Schools days and years should be longer. The current system was built on the agrarian calendar, but kids should be in school longer these days.

Reality: Only the ignorant believe the agrarian calendar is the reason schools take a summer break.* And there is no evidence lengthening the school day improves learning, absent other factors. 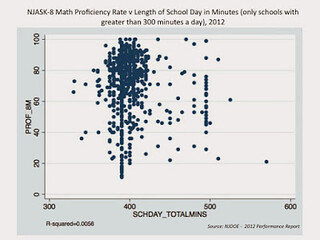 Of course, Christie’s own kids go to schools with shorter years than the public schools. But his kids get to partake of high-quality supplemental learning opportunities during the summer, full of sports and SAT prep and travel** and the like. Everyone else gets to sit in a classroom.

Christie talking point: We don’t have a longer school day because “the teachers union likes to be off four or five months a year. They like to get a full-time salary for a part-time job.”

Reality: Teachers make less than similarly credentialed workers. I know Christie is being fed data points generated by the conservative think-tank industry, but these reports are garbage (judge the arguments side-by-side for yourself if you think I’m wrong).

In any case, I find it laughable that Chris Christie wants teachers to work more hours for no more pay even as he gives away hundreds of millions of dollars in fees to hedge fund managers who underperform. Apparently, more money for inferior work is OK in some sectors of the economy, but not others.

As to having schools open during the summer: even if teachers worked more for no more pay, how would he come up with the money to air condition all of New Jersey’s classrooms? Because I can guarantee you: if the AC ever broke down at the governor’s office, Chris Christie would never walk through the door until it was fixed.

Christie talking point: “In New Jersey, in the places where we spend the most money, we get the worst results.” 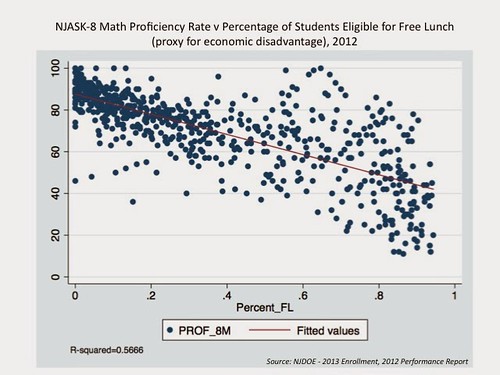 Depending on the measure, anywhere from one-half to three-quarters of the variation in test-based student outcomes can be explained by student poverty measures. But Chris Christie has done nothing to alleviate childhood poverty.

Christie talking point: Charter schools are getting better results, because kids are spending more time in the classroom.

Reality: If children don’t have good opportunities outside of schools for supplemental learning activities, they are certainly better off being in school for a longer period (they should be engaging in high-quality opportunities in a rich variety of learning domains). But that costs money. How do I know? Because the “successful” charter schools Christie lauds have shown this to be true: 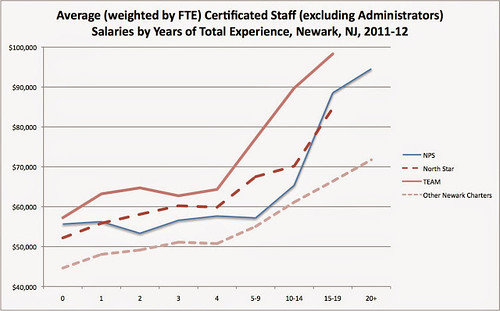 North Star and TEAM/KIPP, two “successful” Newark charter schools, pay their teachers more than the neighboring public schools, even when accounting for experience. They are able to do so for three reasons:

1.  They rely on large amounts of philanthropic giving.

2.  They churn their staffs, so they only have very few teachers with relatively large amounts of experience.

Contrary to how some have mischaracterized my work, I do, indeed, think public schools have something to learn from North Star and TEAM/KIPP: money matters, and student populations matter. Because when you strip away the advantages in both of these factors, you find that these “high performing” charter schools are really quite average.

Christie talking point: Every kid should have an iPad.

Reality: OK — how are you going to pay for that? Or are you also going to blame the teachers union for a lack of technology in the classrooms?

Christie talking point: We need to motivate our students.

Reality: Please explain to us, governor, how we can get more teachers capable of motivating students into our schools when you break your explicit promises to them? When you refuse to properly fund their pensions, in contradiction to your own law? When you continually insult them? When you refuse to allow them to have a say in their own profession? When you target experienced teachers of color working in urban schools repeatedly?

America, Chris Christie has done more damage to public schools and the teaching profession than any governor in the history of New Jersey. If you care about education, he is the worst possible man to put in the White House.

Remember this as he continues with his self-delusional bid for the presidency. Chris Christie is a failure on education, as he is with everything else. 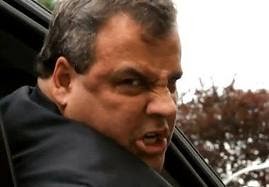 Stop pointing out my record! I’m an awesome governor!

Everyone loves me! If they don’t, they’re idiots!

* I know this is petty, but it really does bug me as a kid who grew up working on a farm: no one “tills the fields” in the summer. The planting is already done by then.

** OK, I need to be fair: that $30K trip to Jordan was during the spring. But his family does take extensive summer vacations.

It’s also worth pointing out that Christie’s own Lt. Governor says 10 percent of the state’s jobs depend on tourism. How would extending the school year, therefore, affect the Shore economy? Did Christie ever stop to ask such an obvious question?