Too Big to Sue?

After the New Jersey Department of Environmental Protection proposed an eight-billion dollar lawsuit based on Exxon’s despoiling of numerous sites in New Jersey, the Christie administration is pushing through a $225 million settlement – less than three cents on the dollar – ending any future remediation or consideration for Exxon’s pollution.

Today, Assemblyman John McKeon, chair of the Assembly Judiciary Committee, held a hearing to gather facts to try to determine if this settlement is in the best interests of the public.

While such a low cash settlement without much public discussion may seem odd, it makes sense if you look at it through the lens of Governor Christie’s political aspirations. Settling for the low number now, and channeling most of that money into the general fund,  provides Christie with another one-shot gimmick to enable him to boast of a balanced budget, even though that goal is constitutionally required. Waiting for prolonged litigation to force Exxon to pay its fair share would not help Christie, who will be long out of office by the time the lawsuits are settled.

Most of the key players in the Exxon giveaway were invited to provide comments. Exxon declined. Acting Attorney General John Hoffman declined. Department of Environmental Protection Commissioner Bob Martin declined. While all gave as a reason the pending lawsuit, the Christie administration’s actions in most issues like this have never been transparent.

As Assembly McKeon pointed out, not only has the proposed monetary award been drastically reduced, but many more polluted properties have been added to the settlement. Some of this information is just coming out right now, and with only a month left in the public comment period, that is a concern.

Further clouding the issue is Governor Christie’s repeated grandiloquence at his taxpayer-funded political rallies stating that Exxon will pay every penny that is required to clean up the sites. As with most of Christie’s pronouncements, there is a grain of truth here, but only a grain in a silo-full of problems. What Christie ignores is what the lawyers call Natural Resource Damages (NRDs). It’s one thing for Exxon to put a layer of dirt on top of a polluted site, but NRD settlements compensate citizens and the state for damages to wetlands, wildlife, and water tables that are caused by the polluters, and requires a more robust (and expensive) cleanup. Otherwise, another hurricane or other disaster could breech inadequate protection, and environmental problems are back. Assemblyman McKeon pointed out that under Governor Corzine, there were 150 NRD settlements – under Christie only one. 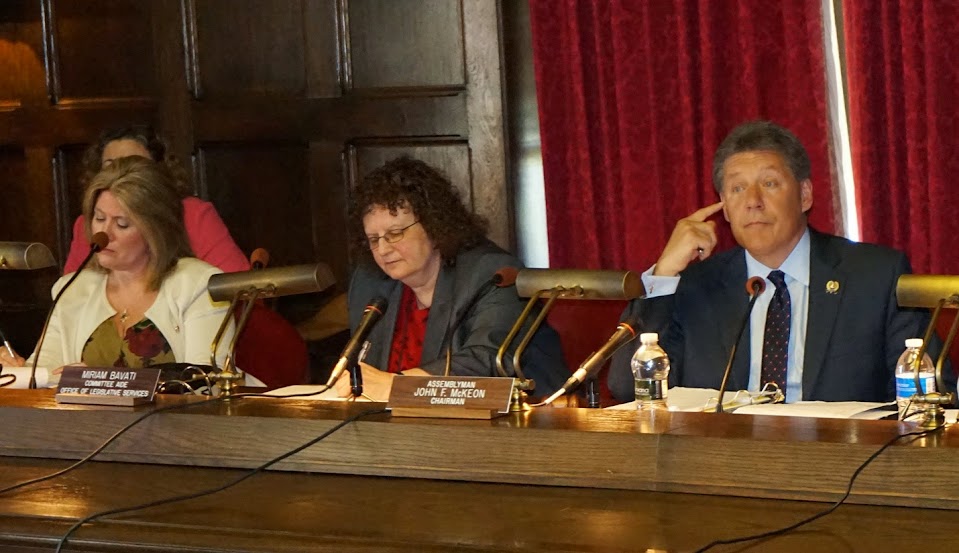 Carrying the (somewhat polluted) water for the Christie administration at the hearing was Assemblywoman Holly Schepisi. She started off with an incredulous rhetorical questions – why are we (the legislature) trying to second-guess the work of the experts in the DEP involved in the settlement? She and her Republican colleague, Assemblyman Michael Patrick Carroll, repeatedly referred to other drawn-out lawsuits involving Exxon and wondered if holding out for a better settlement for the taxpayers over the longer term was the correct strategy.

Settling for this relative small sum not only is detrimental to future generations in New Jersey, but as Assemblyman McKeon points out, it sets a bad precedent for bad actors in the future.