Meant to feature this a couple days ago, but breaking news got in our way. From our friend Marie Corfield, cross-posted with her blog – Rosi.

Last week broke some kind of record. The Star Ledger started the week with a front page expose on the cost of the PARCC exam (no one really knows), and then, not one, not two, but three pieces of ‘reformy’ education propaganda appeared on its op-ed page.

Education blogger Stephen Danley made mincemeat of the third one even before it hit the presses. More Camden schools are being closed and turned over to charters, and the good people of that city have no say because the Camden Advisory Board of Education is “accountable to one group, and one group only: our children.” Lucky for them because if they were accountable to the taxpayers, things would be very different. Please read and share Stephen’s excellent piece. We must continue to expose the denial of democracy in that city.

But back to the first two…

Jersey Jazzman, Ani McHugh and I have called out Tom Moran on his blind faith in education ‘reform’ numerous times, but for whatever reason, he refuses to take off his rose-colored glasses. So, I am throwing in the towel. I surrender! Tom Moran is absolutely right. “This hysteria about the PARCC exam needs to stop.” This test will save humanity! Corporations, hedge fund managers and billionaires really are altruistically trying to save America’s public schools (the ones their kids don’t attend). There is no profit-making going on. It’s all a conspiracy theory. We’re all ‘tin foil hat’ crazies. Dear God, how could I not have known?

WAKE UP, PEOPLE! THERE IS NO CONSPIRACY! 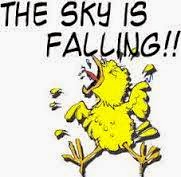 Friends, we need to stop running around like Chicken Little ranting that the sky is falling in on public education. It is vitally important that we stop the hysterics and focus on this test because…

[T]here is a broader public purpose here, one much more important than taking pot shots at the PARCC. One of the main reasons we need this standardized test is for parents in struggling districts like Camden or Newark, who would otherwise have no way of knowing whether their kids are in a failing school. The whining of parents in districts that don’t have to worry about that sort of thing shouldn’t take precedence. (emphasis mine)

Wow, I had no idea the PARCC opt-out movement was just a bunch of ‘white suburban moms’ being too overprotective. I thought parents in Newark and Camden were just as ticked off about it as the rest of us. But I guess Tom is right. It doesn’t matter that far too many urban public schools are underfunded, falling apart, and have high concentrations of high poverty students. Parents in low income urban areas need this test to tell them how bad their public schools are because they are too ignorant to know any better, so suburban parents should just suck it up and force their kids to take this test for their sake.

But what do I know? I’m just a teacher. What do education researchers like Jersey Jazzman, Dr. Bruce Baker, Dr. Chris Tienken, Dr. Julia Sass Rubin, Dr. Diane Ravitch or any of the other researchers and bloggers who’ve been exposing the for-profit motives and flawed methods behind education ‘reform’ know for that matter? What do the parents who’ve taken the sample PARCC tests-and failed miserably-know?

None of that matters because according to Moran, this test is the ‘Great White Hope’, that will finally defeat poverty in our mostly minority, urban areas. But that big, bad teachers union is messing things up:

“With the added variable of a multi-million dollar campaign against the test by the teacher’s union, which doesn’t want the PARCC to factor into teacher evaluations, the collective freak-out has reached a crescendo.”

What a load of malarky!

Yes, parents in poor urban areas need the test scores from kids in rich white districts to tell them their schools are ‘failing’. And the teachers union is just messing everything up because, you know, The Gates Foundation, The Broad Foundation, Students First, The Koch Brothers, The Walton Foundation, they are the only ones spending millions of dollars on campaigns that push their education message.

I wonder how he’d feel if cardiologists were held accountable for their patients’ health after McDonalds managed to convince America that Big Macs would cure heart disease?

I am stopping short of calling Moran a liar because when one lies, they deliberately mean to deceive. I don’t think Moran means to deceive. I think he is in denial like birthers, climate deniers and vaccine opponents who blindly cling to faith-based beliefs in the face of overwhelming research and evidence.

And he calls us conspiracy theorists…