Here’s the subject field of an email I got last night from the DNC:

Inside was this gigantic poster-like image, which is – no kidding – too large to get all of it into a screenshot, even after shrinking my screen down as far as it goes. First of all, notice who doesn’t make their cut for Republican manly-manly men who wanna mess with Hillary – one Chris Christie. Now, the rest of the graphic – it’s lurking in your Inbox, too – informs you these guyz are gonna do whatever they can to make sure “a Democrat” isn’t the 45th President of the United States. But unless you’re dense, you know they don’t mean “a Democrat”, they mean her.

I get it. No other serious Dem contenders are in the game – yet. Martin O’Malley, Bernie Sanders, Jim Webb, Lincoln Chaffee – all just mulling. Just like HRC was about 48 hours ago. Ditto Biden. But given the giddiness, the veritable fainting couch moment the DNC is having right now for Hillary Clinton, does anybody really believe any other candidate will get this kind of hoopla? This kind of fanboy/girl wet-lipped anticipation?

The DNC chair, and staff – per DNC bylaws – are supposed to exercise impartiality and evenhandedness between presidential candidates & campaigns during the nominating process (Article 5, Section 4).

We may be too early in the process for Blue Jersey to formally suggest DNC is stacking the deck for Clinton, like NJDSC did in 2008. But it’s not too early to point out the danger of jumping the shark, before the shark even wins Iowa. DNC needs to settle down. 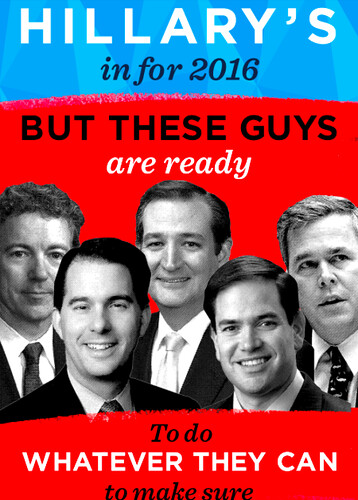