Housing Investments Create Opportunities for All: Rethink the 2016 NJ Budget

This is the 4th in our 7-week series Rethink the 2016 NJ Budget with Anti-Poverty Network. Arnold is Senior Policy Coordinator for the Housing and Community Development Network (HCDNNJ). Look for posts every Mon & Wed around Noon. Promoted by Rosi. 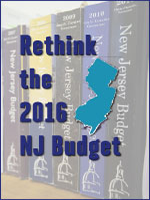 The most densely populated state in the nation is also the most economically diverse. New Jersey is home to some of the wealthiest places as well as some of the poorest. The problem we’re experiencing is that due to our slow economic recovery, the foreclosure crisis, and Superstorm Sandy, a growing number of our residents are finding themselves among the working poor. Sadly, the State isn’t making the crucial investments needed to create more affordable home opportunities.

New Jersey has an imbalanced housing market. Luxury rentals and McMansions are plentiful but more modest affordable rentals and starter homes are few and far between. As housing costs outpace wages, demand for affordable homes is soaring, but we are faced with a housing crisis because housing production dollars are being diverted and we are underinvesting in assistance for those who need it.

The State Rental Assistance Program (SRAP) assists very low-income families, the elderly, and the disabled to afford decent, safe housing. In recent years however, the number of SRAP vouchers have declined due to under-investment despite the increased need. In order to address the housing needs of extremely low-income individuals and individuals with disabilities, SRAP must be funded at a level that will provide the full 5,000 vouchers funded in fiscal year 2011. In addition, Governor Christie has used dollars from the Affordable Housing Trust Fund – which is intended for housing production – to fund SRAP. This has left no money from the State’s fund, which is dedicated for affordable housing to rehabilitate or build new homes low income people can afford. We need to free up money for housing production by funding at least half of SRAP from either the General Fund or a dedicated funding stream to meet a demand that has surpassed supply.

Investments into the SRAP program and affordable home production is an economic driver. When a person is spending more than 30 percent of their income on housing costs, they are unable to spend on activities that spur our economy like going out to dinner, buying clothing, or traveling for example. If less people are going out and spending, patronizing local businesses, it puts jobs in jeopardy. Job cuts result in the need for financial assistance, eventually bringing the problem back full circle.

According to a study from the National Association of Home Builders, an investment of $25 million dollars means: