Christie is bringing his roadshow of BS to New Hampshire. Town hall-style events, which worked for him in New Jersey until they didn’t, will be a key part of his 4-day swing through the state, his longest to-date. Team Christie 2016 euphemistically titles these his “Tell It Like It Is” Town Hall Series, the first is April 15th. Christie is a master communicator, and excels at this kind of propaganda offensive, tightly choreographed and engineered to look like real engagement with the plebes. You know all this; we’ll have to wait and see whether it bamboozles the Granite State. He’s got to do something. He needs to snatch back their attention from Jeb (and everybody else), or at least redirect it away from his dismal record in New Jersey, the record credit downgrades, and the federal investigations hanging over his head.

Hat/tip to writer Nick Ripatrazone who caught the suddenly live Twitter feed before I did: 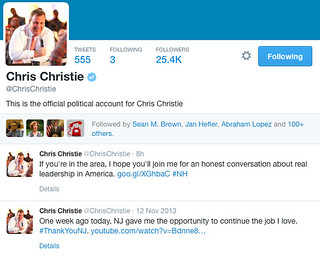