Open Letter to @CoryBooker: You can be part of the #OccupyNPS solution

UPDATE: Newark Public Schools is reporting a meeting between students and Anderson took place this morning. 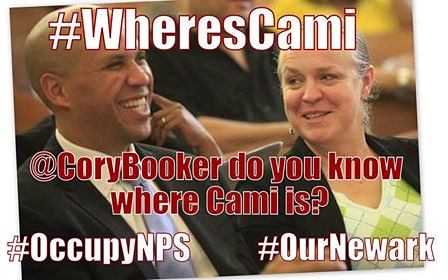 The civil disobedience being led by the leadership of Newark Student Union is in its 66th hour. High school students have vowed not to leave Superintendent Cami Anderson’s office at Newark Public Schools until she agrees to speak with them. She has not been at work at NPS for the 3 days of their sit-in.

So where’s Cami Anderson? Senator Cory Booker, you presided with Gov. Christie over her choice to lead Newark Schools. You no longer run Newark, but you live there and own property there. More importantly, the kids you see on the street or walking to school every day – who grew up knowing you as Mayor – are still kids I hope you feel some responsibility toward. Some of the bravest and strongest of them are now in Day #3 seeking a meeting with her. Imagine if you, not as a senator necessarily but as an involved community member, would intercede and escort her into Newark Public Schools HQ on Cedar Street. That might be the beginning of an important conversation. And the sons and daughters of your City who are now waiting at 2 Cedar Street, deserve that.

Our Newark: This civil disobedience protest, in a minority majority city in the middle of Black History Month – with issues that many other city school systems are also facing – is generating tremendous support not only on the streets in Newark, but on social media. And that’s a place where you have tremendous influence. One of @NewarkStudents hashtags is #OurNewark. Senator, it’s your Newark, too. Can you help?

What can the rest of us do? Help Newark Student  leaders get the word out however you can. On Twitter? Follow @NewarkStudents. Hashtags: #OccupyNPS #WheresCami #OurNewark. And on Facebook.

Sixty-six hours ago, the leadership of Newark Student Union – high school students in their teens – began a sit-in protest in the executive offices of Newark Public Schools, demanding to speak with their Superintendent of Schools, Cami Anderson. Since then, Anderson has not been seen at work, though she was working at a pub in Union that I mapquested at 6.76 miles away. Since then, there was an attempt to starve them out (which ended when clergy finally pushed through security), and attempts to intimidate them and their parents.

These young people deserve better. They deserve to be heard.