UPDATE 1: Watch Newark Public Schools officials attempting to withhold food brought to the building by parents & community to manipulate students into ending the sit-in in order to eat. Food was held up for hours by NPS officials yesterday, until clergy forced themselves through security. Watch

Full letter, signed by Cami Anderson’s Assistant Superintendent, is at end of post.

Yesterday, as Newark high school students were rolling toward their first 24 hours of a sit-in protest at the office of School Superintendent Cami Anderson, this letter was hand-delivered to their parents at their homes. I’m told that Newark police officers were used to deliver them, a dubious use of law enforcement personnel. Nothing says I care about your kids better than sending a cop to your door.

I have no info that any of the families whose daughters and sons are now in Hour #40 occupying 2 Cedar Street are anything but fully in support of their kids’ actions. For that matter, these students have considerable back-up – from their local communities, fellow students, some of the school board members, many of their teachers. And Mayor Ras Baraka, former principal at Newark Central HS, who has called for Cami’s resignation standing next to some of these same students.

You’d never know that, reading only this letter, which takes a distinctly superior, scolding tone:

“We attempted to reach you this morning to pick up your child, but you chose not to.” [snip]

“Our mission is to educate, therefore we attempted to have your child attend school this morning by providing a school bus to transport [her/him]. However [she/he] refused this request.”

Let’s unpack this for a second, because there are a few things to know:

(1) This isn’t a lark; it’s not a truancy. This is a political action.

(2) Family. If parents “chose not to” collect their offspring, NPS and its chief Ms. Anderson should take that as evidence that the continued presence of these sons and daughters in her office represent a family decision, and commitment.

(3) This letter is a threat. This is the leading edge of an attempt to classify the students as unlawful, illegitimate and unauthorized (much like what these people were accused of 79 years ago). And to paint their parents as irresponsible.

They’re not who’s irresponsible. That better describes Superintendent Anderson, who was photographed hiding out at a pub in Union, her laptop in from of her, perhaps watching news coverage or the live-streaming of demands and interviews they’re broadcasting from her office.

Memo to Cami Anderson: I mapquested. You were 6.76 miles away, 12 minutes. And yet, you did not show up or even call the students, who you know are not random outliers but the leadership of Newark Students Union.

Instead, you gave every impression of a woman hiding out, resentful of the unflattering situation, but dead set – or at least not prepared – to deal with the challenge … of talking to a bunch of teenagers. How ridiculous. Remind me, who’s the adult here?

NPS spokeswoman Brittany Chord Parmley could not have sounded more condescending, trying to paint this conscious political action as a compromise to ‘valuable learning time.’ Leave aside for a moment that this tight group of school kids are in better touch with the hopes, dreams – and requirements – Newark residents have for their education system than its absent leader. And the fact a bunch of mere kids is schooling a wayward school regime right now.

The fact is that Newark Students Union’s protest is peaceful, intelligent and well-supported. Its leaders won’t be brushed off. Or starved out – refusing to send up food brought by parents for 4 hours makes only the remote Cami look ridiculous. It shouldn’t take Montel Williams or anyone else to finally get breakfast to teenagers on public property.

The optics on Cami Anderson, Chris Christie’s golden girl of reformy privatization, are awful. And not just because of this sit-in, or these students. In a business setting, someone whose incompetence and arrogance racked up as much of a vote-of-no-confidence as she staggers under would be gone. Yet she digs her heels in. Refuses to attend school board meetings, because somebody might criticize her. Is so fearful and unprofessional she’d rather see threatening letters sent home than walk through her own door and have a conversation. Everything is oppositional for this woman; it’s her own students she’s threatening, an incredibly immature response for a top administrator getting more than $250k salary – plus bonuses.

Cami, absent now for at least two days, increasingly isolates herself with this behavior. She still has Chris Christie. And just about only him. But who knows for how long? He’s an absentee governor with other things on his mind. 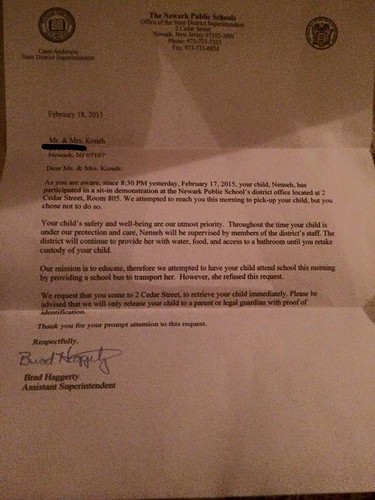