I live in the kind of small town where people have front porches, and actually sit on them. And at my house, when the weather cooperates, we sit out with poetry and wine and read stuff aloud. That’s how we roll. 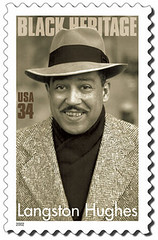 Top of the list is Langston Hughes, born this day 113 years ago on Feb. 1, 1902 (died May 22, 1967). Why? His America was very familiar. We were both New Yorkers; he was Harlem, I was Brownsville, Brooklyn. He wrote like people speak; I’d never read a poet before who did that. About life, and work and getting kicked down; I could relate. And he was incendiary. If other poetry was flowery, or hopeful, or wistful, Langston laid it out.

My other favorite city is Washington; it’s just Southern enough for me. And I never fail to stop in at Busboys & Poets, the restaurant/meeting & art space/bookstore dedicate to him. Whatever kind of bad day I’m having hits a wall when I walk in that door, for the Harira soup and the mural of forward thinkers by owner Andy Shallal. And the rooms, in Busboys’ satellite locations in Virginia and Maryland, dedicated to Langston’s fellow Harlem Renaissance poet Countee Cullen, to historian Howard Zinn (uncle of my childhood friend), and New Jersey’s own Paul Robeson, who my father helped bodyguard at the New York concert that became the Peekskill riot.

And it all reminds me of something else, something not very nice about my town with the nice front porches.

Twenty years ago, I was the director of First Night Flemington, part of the national First Night New Year’s Eve movement transforming public spaces and the streets themselves into stages for performing and visual arts, kept low-cost to include everybody. We did something that usually only the big-city First Nights did. We commissioned new work.

And so, in our first year 20 years ago, we put together a piece built on Langston Hughes; we found an actor with a beautiful, sonorous voice reading Langston, and we paired him with a jazz saxophonist. It went poem, and sax, and poem, and sax. The reader, black, the musician white. And we put this performance in the library, where words belong. (That year, they were also invited to perform this at NJ’s statewide MLK Day celebration at Trenton War Memorial).

Twenty years ago, Flemington was pretty much lily-white, and many people hadn’t heard of the jazz poet or the Harlem Renaissance. Most of the audience was open to it.

But there was this one woman, and I think of her all the time. She’s always reminded me of Sinclair Lewis’ commentary on small-town America – Main Street.

Her comment – loudly expressed, as though she was entitled to have her pronouncement be the final word – was “This is all well and good, but we should have more AMERICAN entertainment.”

No dreams deferred. No crystal stair. No soul grown deep like the rivers.

She wouldn’t get it, anyway. In quite a different way for the lady for whom Langston was too other, America was never America to her.