Quote of the Day today is from Doug O’Malley of Environment New Jersey, who joins NJ leaders calling out the White House for a decision that opens New Jersey to enormous risk of damage to NJ’s beautiful territory.

With the news that the federal Interior Department is lifting a 5-year moratorium on drilling in coastal waters along part of the Eastern seaboard, there was quick response from several of the members of NJ’s congressional delegation.

In a joint statement, senators Menendez and Booker and Rep. Frank Pallone, who represents shore towns in Monmouth, issued a joint statement, warning that the economic consequences of an oil spill near our coastline would be catastrophic. That concern was echoed by a tweet from Rep. Frank LoBiondo who reps towns along many miles of South Jersey shoreline. At the other end of the state, Rep. Bill Pascrell, whose interior district fronts marshland and the Hudson, commented that the risks outweigh the benefits.

Gov. Christie, fleece-clad and reassuring, vaulted into the national mindset as the face of Sandy recovery – this, before New Jerseyans saw how incompetent at recovery his administration was to be. That’s less a concern to national GOP voters, they’re still grooving on his hollow image. But this move by the White House leaves Christie in a weird position. He’s spoken out against drilling off NJ’s shore in the past. But that was before. Now that he’s vying for the GOP nomination, coming out against Atlantic drilling might not sit so well with some people whose checks he craves for 2016.

But I like what Doug O’Malley of Environment New Jersey said, taking this right to Obama, where it should be:

“President Obama’s legacy should be clean energy, not oil-slicked beaches off the Atlantic. The Jersey Shore and our coastal communities would be placed in an oil bulls eye, with Cape May only 90 miles from proposed drilling off the Virginia coast. Oil spills don’t pay attention to state lines, and Cape May’s beaches shouldn’t be collateral damage. The Shore’s $38 billion tourism economy and our natural heritage are more important than any oil company’s bottom line.

The Atlantic Coast – and the Jersey Shore — is not a chit to be dealt with big oil companies. Our coastal communities shouldn’t be placed in harm’s way and our oceans shouldn’t be handed over to oil companies. This proposal was wrong five years ago, when it was withdrawn amidst heavy public opposition during the backlash of the BP disaster in the Gulf of Mexico. Clearly it’s still wrong today.”

O’Malley’s statement reminds readers that scientists – including from Rutgers and Princeton – clearly show that New Jersey and its coastal communities are already at risk from the impact of climate change. If parts of the Atlantic are opened to oil drilling, even if NJ isn’t in the drilling zone, any attempt to restructure Atlantic City to a different kind of family tourism is shot. And multiply that for towns up and down our Shore. It’s a big score for oil companies, but it’s not worth the risk of this: 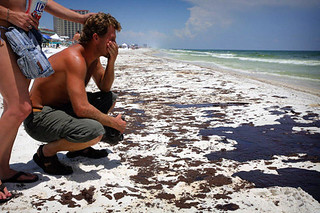