When the facts aren’t on your side…

When you’re up against the wall…

You take the cheap shot.

That’s what the New Jersey Charter Schools Association did last week when they filed ethics charges against Rutgers Professor Julia Sass Rubin who, along with doctoral student Mark Weber (aka. Jersey Jazzman) published this study on the segregationist practices of the state’s charter schools which concludes what we already knew (from JJ’s post):

New Jersey’s charter schools do not serve nearly as many children in economic disadvantage, who have special education needs, or who are English language learners as their host districts’ schools.

Here’s the crux of the NJCSA’s complaint:

As an association of educators [more on this below], the NJCSA embraces the right of all educators to speak on matters of public debate. But the NJCSA and its members will not stand by as Dr. Sass Rubin devalues the reputation of our State University, a reputation that has been earned over years of excellence in research and academic achievement, to endorse her personal opinions and advance her personal advocacy interests. Because Dr. Sass Rubin has promised two further ‘studies,’ the NJCSA has filed this complaint today to ensure appropriate corrective action is taken before Dr. Sass Rubin releases her personal views as Rutgers research and creates further embarrassment for Rutgers University. (emphasis mine)

Does anyone besides me find it interesting that this press release is not on the NJCSA’s website? I mean c’mon, this is big ‘reformy’ news! Sadly, I found it on the uber-‘reformy’ and always entertaining (for its sheer lack of veracity) NJ Left Behind blog.

Why? Maybe because the NJCSA knows it got caught red handed. Maybe because they know these are not Julia and JJ’s personal opinions. The data they presented is right out there for the whole world to see on the NJ DOE website-data that the charter schools themselves reported. There was nothing to OPRA. Any 5th grader who knows how to do a simple web search can easily find it.

They’re backed into a corner and have nothing left to do but pull a trick out of the bag of their biggest cheerleader: Gov Christie. They launched a personal attack. They skirted the real issues and went for the low-blow. Educator/blogger Peter Greene reports

The NJCSA is behaving like a punk, and like a weak punk at that who lacks the tools or the skills to come at Rubin and Weber directly. And they have more work to do, because as Weber points out on his own blog, the conclusions have already been acknowledged as the truth by [‘reformy’ Newark Superintendent] Cami Anderson and [‘reformy’ Camden Superintendent] Paymon Rouhanifard, so NJCSA better start ginning up a full scale job-threatening division for the entire state.

(My note: In the press release NJCSA calls itself an “association of educators”. In addition to what Bob Braun lists below, I added what is also known about the board members, charter schools and other organizations with which they are associated, including links to other posts and information, and indicated in green or red whether or not they are actual educators. In some instances I was not able to find conclusive evidence whether or not the individual has a degree in education. If anyone does find evidence, please let me know. I do want to be accurate. There is a big difference between someone who works in education vs someone who is actually trained as an educator and has K-12 teaching experience.)

HERE ARE THE BOARD MEMBERS OF THE NEW JERSEY CHARTER SCHOOL ASSOCIATION. CONTACT THEM AND DEMAND THEY WITHDRAW STATE ETHICS CHARGES AGAINST JULIA SASS RUBIN. I think it’s a hoot that Dawood Farahi, the president of Kean, and Ryan Hill, executive director of TEAM Academy, are on the board. Farahi and his odd resume and his $210,000 executive piece of office furniture–and Ryan Hill and his involvement in “Pink Hula Hoop.” They have the nerve to file ethics charges against anyone? And, hey, look-a Rutgers administrator is on the board-does she issue a disclaimer every time she speaks? Does her presence on the board mean Rutgers is in favor of charter schools, and defends their abuses in Newark, Jersey City, Camden and other cities? This is just the beginning, guys. The Ledger and philly.com will tire of using your press releases but you started something. (emphasis mine)

Yes-less than 5 years actual teaching experience, including 2 with TFA.

Ms. Meredith Pennotti, Chair, Members Council, School Leader and Principal, Red Bank Charter School, one of the most segregated in the state. Unable to determine her college degree(s). The fact that she is a principal sways me to say Yes.

Ms. Sharon Brennan, Program Analyst, Robert Treat Academy Charter School, one of the most segregated charters in Newark. I’m saying No. I was only able to find the college she attended, not her college degree(s). She does not list teaching in her Linkedin profile. She was endorsed for teacher training by 1 person.

Ms. Wanda Garcia, Associate Director, Rutgers-Camden Community Leadership Center which is run by Gloria Bonilla-Santiago who also runs LEAP Charter School about which Jersey Jazzman has written extensively. No. She is listed as having an MSW. Although she works at Rutgers, I cannot find any information that lists her as an instructor.

Mr. Paul P. Josephson, Partner, Duane Morris, LLP, Board Chair Princeton Charter School, one of the most segregated charter schools in the state. No

The following is a list of NJCSA staff and their ‘education credentials’:

Jennifer M. Bredehoft, Director of Growth and Development No

Amanda Vega, Manager of Communications and Marketing No

Carrie Wetherby, Manager of Membership and Events No

There you have it, folks. Out of 19 people who run this organization, a grand total of four are actually trained educators. However, if you’re talking ‘reformy’ educators, well now, that’s a completely different story. In ‘reform land’ pesky little details like that don’t matter. But money… biiiiig, juuuuuuicy, corporate and philanthropic money? That means a lot! And NJCSA has a lot to lose if too many state legislators, and concerned parents and citizens start making a big to-do about Rubin and Weber’s research. We’re talking at least $2.16 million. That’s how much The Walton Family Foundation has given NJCSA from 2009-2013. So they are scrambling to spin the blame away from them and onto Julia .

It’s perfectly okay for them to spew half-truths and outright misinformation on charter school successes. It’s perfectly okay for them to do nothing about the segregation taking place in their schools. But boy-oh-boy, don’t you dare call them out on it or they will do everything in their power to take away your right to free speech! They will attack you personally, and completely avoid the facts as presented. Check out Julia’s defense on Twitter: 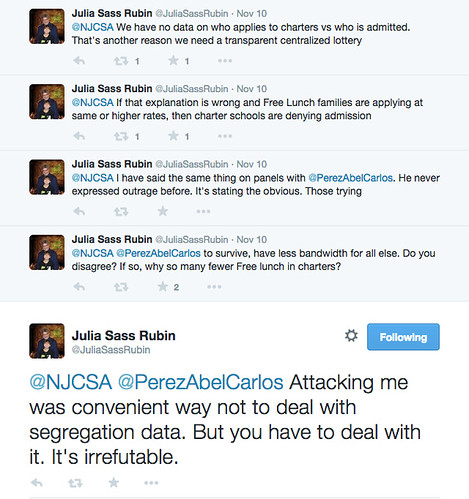 These are thug tactics, but I know Julia and Mark are not intimidated in the least. We all need to be very concerned about the outcome of this intimidation. Suppression of free speech and the elimination of public education are the beginning of the end of democracy.