Cami’s epic fail in the eye of another epic snowstorm

So, Chaotic Cami, who cannot seem to overcome her own organizational problems (among other things), didn’t get it together to inform parents what was going on for school today until kids were already on their way in, and many parents already on their way to work. Promoted by Rosi. Cross-posted with Marie Corfield. 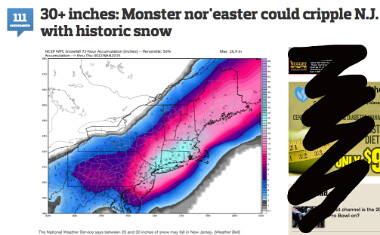 The only way you don’t know about this is if you’re sipping umbrella drinks pool-side in Cabo-or, apparently, you’re Cami Anderson.

Blizzard warnings have been issued for northern and eastern New Jersey as a “crippling and potentially historic” storm sets its sights on the northeast.Snow totals could exceed two and a half feet. Drifts could be far higher. High winds will reduce visibilities to near zero.

Before 8pm last night they posted a list of school closings and delays, including early dismissal for Newark’s TEAM and Link Charter Schools. Superintendent robo-calls went out state-wide last night to inform parents of their district’s plans. I got my call. And in case anyone missed any of it, everyone took to social media to spread the news.

I saw a couple of posts from teachers in Newark who were pleading with Cami to make the call-any call: early dismissal, school closed, SOMETHING!

Instead, they got nothing. The superintendent of the state’s largest school district which, in about 12 hours will be getting hammered by epic blizzard conditions, was silent.

Does this sound familiar? Keep reading.

I live about 50 miles west of Newark. We’re supposed to get about 20″. Newark is supposed to get more. This morning I got a robo-call at 5am announcing my district is closed today. NJ Transit is warning commuters to expect significant service shutdowns. This storm is a BFD!

So, imagine my disgust when the Newark Parents Union-not Cami Anderson-posted on Twitter at 4am that the district had canceled all after school programs-but school was still open!

Then at 8am – when most parents are on their way to work and most kids are in transit to school – NPU tweeted that the district would go to a 1pm dismissal.

I called a friend in the NPU and he told me that they-not the school district-had been fielding calls from frantic parents since 3am! He said the only way he knew about the delay was through teachers who were notified at 7:35 this morning!

The district can’t even get to the kids when the sun is shining. I can’t imagine what it will be like today.

Many of our parents work in New York City. There was no time to contact their employers to let them know. They have to get in and out of the City in a very short amount of time under really bad conditions. Other parents work at hourly-wage jobs. They had no chance to make plans.

Many of our teachers commute from the suburbs. How many are simply going to call out today? Who will sub?

This wasn’t something that came up unexpectedly. We all knew the storm was coming. The county sent out a robo-call yesterday that there would be no parking on county roads-many of which are in our school neighborhoods.

Parents are being told to pick their child up at their school.

And as we all know, thanks to Cami’s brilliant One Newark plan, many families have multiple children attending multiple schools all over the district. Do the math. It all adds up to a potential disaster this afternoon.

Why does this all sound vaguely familiar? Because Cami did the exact same thing last year during a major snowstorm, and Bob Braun called for her resignation:

Cami Anderson, appointed by Gov. Chris Christie three years ago to run the Newark schools, should resign immediately because she represents a danger to the children and employees of New Jersey’s largest city. More than a week ago, she kept the schools open in Newark when all the schools in Essex and neighboring counties were closed-including Newark charter schools. Today, she did not order the schools closed until many children and employees were on their way or already in school. Most charter schools were closed by 7 a.m.

Read the entire post. It is simply mind-boggling that this woman is allowed to remain in her position. Where is the ‘accountability’ for her? I hope the joint legislative committee that grilled her a couple of weeks ago reads this-and takes some action!

I pray for the good people of Newark. Travel safely today.