How to Buy an Election

The Federal Election Commission’s third quarter financial reporting is out, and it presents an interesting contrast in the NJ-3 congressional election. Despite the fact that some of the press has been giving the impression that the two candidates are dead even in fundraising, the FEC report shows that North Jersey’s Tom MacArthur is way ahead of district resident Aimee Belgard in the money race. As of September 30, the Belgard campaign took in $1.4 million, contrasted to the MacArthur campaign of $4.5 million. 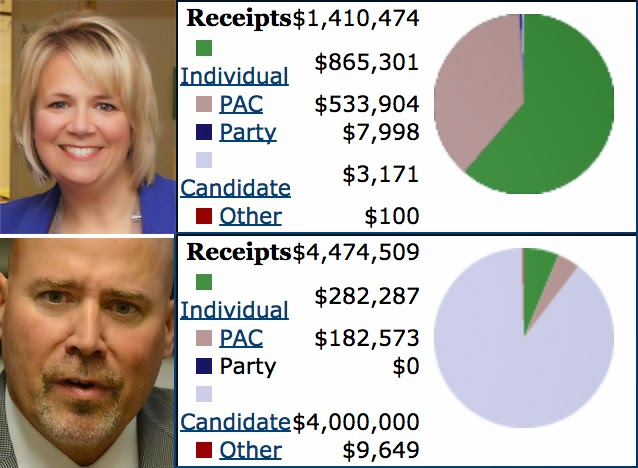 Tom MacArthur has said that he will spend whatever it takes to win this election, and that’s one statement that he is holding true to. Almost 90% of the campaign money comes from a “loan” that he made to his own run.  Contrast this to Belgard’s campaign, where 61% of her money comes from individuals – with the average contribution less than $100.

MacArthur’s vast wealth comes from his time as an insurance company executive, during which time he was accused of stalling or denying payments to disaster victims and refusing to pay overtime to his employees. The former Randolph mayor is against legislation promoting pay equity and for tax breaks for rich people like himself.

Belgard’s commitment to winning is equally as intense, but unfortunately she does not have the personal resources to self-fund. In order to mount a congressional run, Belgard realized early on that this would be a full-time job, and left her position with a local law firm at the time she announced last November.

As a volunteer on the Belgard campaign, I am amazed by the dedication and work ethic that Belgard is putting into this effort. Because she can’t just write a check to the campaign, she spends scores of hours each week on the phone soliciting donations – something that Tom MacArthur doesn’t have to do. These calls obviously take time away from the traditional meet and greet activities, although somehow Belgard seems to be able to fit those in, too. And as a mother of two young boys, she also manages to find the time away from the campaign for school activities and caring for them when they are sick.

Tom MacArthur received the GOP nomination simply because he is able to fund this campaign out of his well-padded wallet. He “donated” $25,000 to the Ocean County GOP when he was in a fight with Steve Lonegan to grab that organization’s endorsement. Indeed, Lonegan’s policies probably resonate better with the folks in Ocean County, but the Bogota native did not have the wherewithal to attract more dollars into another campaign. Neither did other local GOP contenders like Evesham Mayor Randy Brown or Belgard’s colleague on the Freeholder Board, Joe Donnelly, both of whom would have been excellent candidates.

The sad truth is that money is a key factor in congressional races. The district spans the New York and Philadelphia media markets, or to put it another way, the first and fourth most expensive markets in the U.S. MacArthur can easily buy as much television time as he wants to run his highly negative campaign and spread misinformation about his opponent. Belgard’s challenge is to get her positive message of equality, fairness, and true economic reform out on a limited budget.