Paging Olivia Nuzzi. You missed some stuff … (promoted by Rosi). 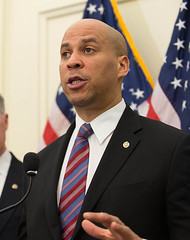 With rumors swirling around Trenton and beyond that the hammer of a federal indictment is set to fall on those involved in the Newark Watershed scandal it is not surprising that someone wanted to get ahead of the curve and write a quasi-political obituary on Senator Cory Booker. Firedoglake has already had an Open Public Record Request (OPRA) related to the Newark Watershed scandal denied under the provision of the open records law that exempts records of an investigation that is still in progress ( N.J.S.A 47:1A-3.a). Something is clearly going on.

Though it should be said up front that just because there is an investigation does not mean anything will ultimately come of it. There’s a lot of investigations going on in New Jersey at the moment. In fact, the US Senate seat Booker now holds was previously held by Senator Lautenberg who came out of retirement to take it after Senator Robert Torricielli was forced to resign due to a federal investigation. Here we go again?

More to the point, just because Booker is involved in an investigation does not mean he will ultimately be the one held responsible. Booker has already had a run in with a corruption investigation when one of his deputy mayors was indicted and convicted on corruption charges. Booker was never charged.

But while there may (or may not) be a need in the near future to write a political obituary for Cory Booker it should be more inclusive and accurate than the recap published by the Daily Beast titled The Ugly Truth About Cory Booker, New Jersey’s Golden Boy by Olivia Nuzzi. Nuzzi correctly notes that much of Booker’s popularity is built on hype and that his actual record as a mayor leaves a lot to be desired, but she also claims “few outside Newark noticed” and credits a right wing opposition researcher and writer and those of his views as the “only people” taking Booker to task for his record of mediocrity verging on venality:

(quote and response after the jump)

With Lautenberg somewhere in the ether, Christie scheduled a special election (at a cost of $24 million to taxpayers) for October 16th. This left Booker’s primary opponents-Assemblywoman Sheila Oliver and two old, white congressmen: the noodle-limbed, sleepy-eyed Frank Pallone and the odd, quiet nuclear physicist Rush Holt-just four months to make their own cases to voters, never mind one against Booker. Besides, there was the fear that any criticism of Booker’s record in Newark would be misinterpreted as a criticism of Newark itself-his identity and his progress as a politician being inextricably linked with that of the city and its residents.

To complicate matters further, the only people who seemed to have any desire to go after Booker were of the conspiracy-theory ilk. Charles C. Johnson, then a writer for The Daily Caller but more recently known for questioning beheaded journalist James Foley’s patriotism and fear-mongering over Ebola, published a thinly sourced story that claimed Booker had never even lived in Newark-which some had long suspected, but-like many things assumed to be true in New Jersey politics-none had been able to prove. Others sunk as low as to question Booker’s sexuality.

That’s not true and, dare I say it, not even fair to the establishment media which had been taking on Cory Booker long before Charles Johnson was on the scene. In 2012 Kate Zernike of The New York Times wrote a blistering take down of then Mayor Cory Booker noting that most of his lofty promises for the city of Newark had amounted to nothing but hot air.

Later that same year the ACLU won a lawsuit against then Mayor Booker to force public disclosure of communications and other materials related to how Booker and company were using a $100 million donation. Emails revealed Facebook executives, including COO Sheryl Sandberg, worrying at how Booker did not seem to have a plan to win support from residents. The ACLU are decidedly not of the conspiracy-theory ilk, especially when they proved it was not a theory in that instance.

In May of this year it was revealed by Dale Russakoff of The New Yorker that not only had Cory Booker been inappropriately secretive with how money for education was being put to use in Newark but that much of the funds had been eaten up by Booker’s cronies instead of going to the school children. Another major blow to Booker’s image of a reformer.

Which is all to say that not everyone in the news media has been completely in the tank for Booker. Though I would happily concede – in fact echo – that the mainstream media generally have embraced style over substance when it comes to Cory Booker and his false image as a reformer. Booker’s style of shameless self-promotion is the right pitch for the corporate media’s frequency it would seem.

But the real opposition to Cory Booker is not right wing writers or the establishment media or even lowly lefty bloggers such as myself. The most substantive opposition to Cory Booker is from within Newark where Booker had to constantly rely on Wall Street money (and perhaps some shady deals) to overcome local distaste and resistance. Booker was soundly defeated in the 2002 election to be mayor of Newark and after he bailed to go to the Senate (D-Twitter) the people of Newark voted longtime Booker nemesis Ras Baraka in as mayor.

So when it comes time to write Booker’s political obituary let us remember that many people inside and outside of Newark and of widely different political worldviews opposed Cory Booker’s phony persona and imagined competence.