Is “One Newark” Racist?

– Under One Newark, “Schools assigned the consequential classifications have substantively and statistically significantly greater shares of low income and black students.” That’s racist.

– Under One Newark, “Schools that are “Falling Behind” have significantly larger proportions of black students than schools that are “On The Move” or “Great.” Those “Great” schools also have significantly fewer students in poverty (as measured by free lunch eligibility) than “Falling Behind” and “On The Move” schools. “Great” schools also serve fewer special education students, and a slightly smaller proportion of boys.”

However, “… even by NPS’s own questionable standards, the classification of schools under the One Newark rating system appears to be arbitrary and capricious.”  That’s racist.

– When the elected mayor, elected school board, and elected city council have all objected to One Newark, but the plan is being implemented anyway because the state controls Newark and several other districts with large numbers of students of color: 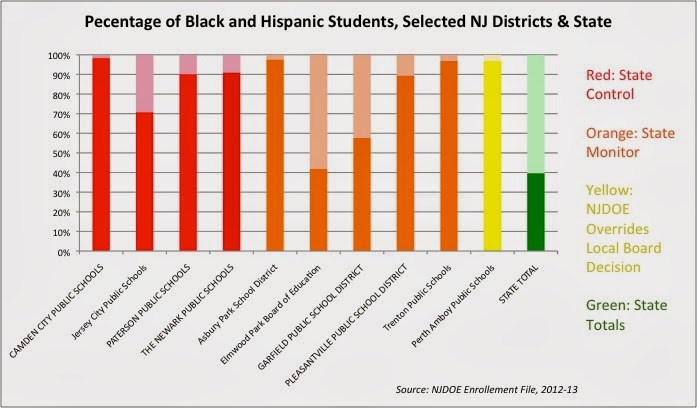 That’s not only racist — it’s undemocratic.

So when three teacher-bloggers say that the head of the editorial board of the state’s largest newspaper espouses a racist policy because he supports One Newark, they can say so confidently.

“I am against giving gay and lesbian people the right to marry.”

“You’re calling me a homophobe!”

“No, I said the policy you espouse is homophobic.”

“Woman make pennies on the dollar compared to men because of sexist policies.”

“I don’t support the changes you want, so you think I’m a sexist.”

“I didn’t say you were a sexist; I said you don’t want to change sexist policies.”

“Same difference. I refuse to debate you any further.”

See how it works? If anyone wants to call a policy racist, or sexist, or homophobic, they have to jump through a bunch of verbal hoops — put in place by assertions of power — and dilute their language to appease those who disagree.

This sort of language policing is little more than a form of protecting privilege.

For what it’s worth, I think those of us who live in various forms of privilege ought to think about this.