Today, there were 2,000 climate change events in 150 countries – the largest mobilization against climate change in the history of the planet – as the United Nations prepares for the opening Tuesday of Secretary-General Ban Ki-moon’s Climate Summit. That will include President Obama, but not, as hoped, to commit the U.S. to contribute funds to help poor countries cope with climate change which has been mostly caused by wealthier countries.

One hundred thousand were expected in NYC today; 310,000 showed up. Mother Jones tracked the day in photos and social media, and this photo is theirs: 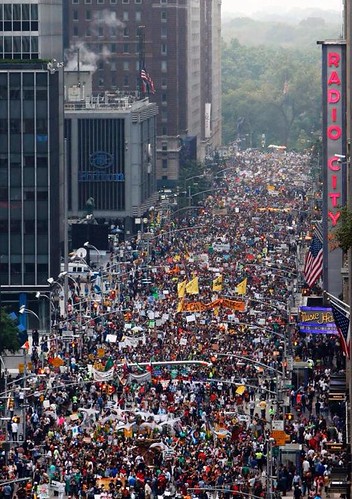 NYC’ mayor Bill DeBlasio marked the day by announcing plans to upgrade city buildings as part of a plan to reduce greenhouse gas emissions from the city significantly by 2050. Chris Christie? Not so much.

In 2011, Christie acknowledged that human contribution to climate change was settled science. But Republicans with White House aspirations, as Christie has had since 2012, realize the money’s cut off to candidates choosing science. Christie’s keeping NJ out of RGGI, despite the fact the legislature correctly sees it as a way to cut carbon admissions. As long as Christie bows to the Koch Brothers and their ilk, the money flows. But he’s counting on his supporters not to think very hard when they consider GOP White House hopefuls .And he’s counting on people to remember him as a self-styled Hurricane Sandy hero doling out sandwiches and hugs, without connecting the dots that Sandy-level weather catastrophes are likely to pound his Jersey Shore to a greater degree as climate change produces more extremes.

The People’s Climate March Site has great slideshows of NYC, events around the world, and how kids helped drive the message.