Where Will All the Boys Go?

I’m pulling this up top again today to make sure as many people as possible see it. Are Gov. Christie’s brave new world reformers even aware of this kind of research? let alone conducting it themselves with the vast power they exercise over the Camden district and its kids? Do they even care? Promoted by Rosi, with thanks to Julia, and to her Rutgers colleague Stephen Danley, at whose excellent site, Local Knowledge Blog, Julia first published this today.

That is exactly what the Christie Administration is doing in Camden.

The Administration is transferring control of public education to three out-of-state charter corporations – KIPP, Mastery and Uncommon Schools – that are completely unaccountable to the people of Camden.  The corporations will take hundreds of millions of taxpayer dollars from existing Camden public and charter schools to build or renovate and operate 16 new renaissance charter schools.*

The three charter corporations are aggressively marketing themselves and their new facilities to Camden parents and could quickly account for 9,300 of the district’s almost 15,000 publicly-funded spots, leading to the closure of the majority of Camden’s public and charter schools.

However, the students these corporations currently educate in New Jersey and Pennsylvania look nothing like Camden’s public school students.  Ninety-two percent of Camden District’s students live at or below the poverty line; 19% have special needs; and 9% have limited English proficiency.  Across the board, KIPP, Uncommon and Mastery educate a significantly less challenging student population.

Even more alarming are the charter corporations’ extremely high attrition rates. The attrition is particularly problematic for boys.  Between 5th and 12th grades, KIPP loses one out of two boys and up to 58 percent of Black boys; and Uncommon loses almost 70 percent of all boys and as many as three out of four Black boys.

Such extraordinary attrition rates may reflect the rigid teaching and discipline techniques used by these charter corporations.  Whatever the cause, having KIPP, Mastery and Uncommon take over the majority of Camden public schools will almost surely result in hyper-segregation, with special needs, Limited English Proficient, and male children most likely to be pushed out of the renaissance charters and into a few “repository” public schools that remain open to hold the students these corporations reject.

We know from the experience of Detroit and New Orleans that, once the local public schools are gone, there is no way to get them back.

As Exhibits 1 to 5 demonstrate, the children attending KIPP and Uncommon Schools in New Jersey are much less challenging to educate than the children attending Camden public schools.  The KIPP and Uncommon students are much less likely to live in poverty; have significantly lower rates of special needs – particularly the most challenging and expensive to manage special needs; and are 100% English proficient.  The charter school students also are much more likely to be girls, who score higher on standardized tests than boys and have lower drop out and discipline rates. 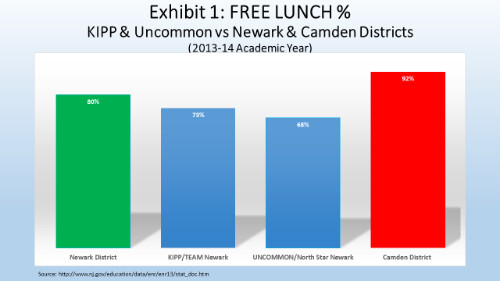 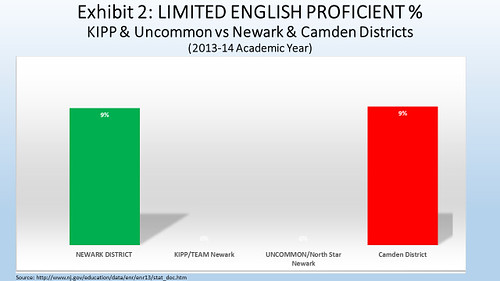 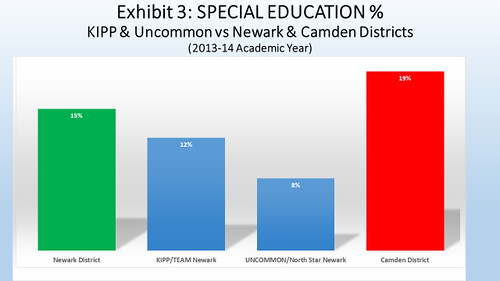 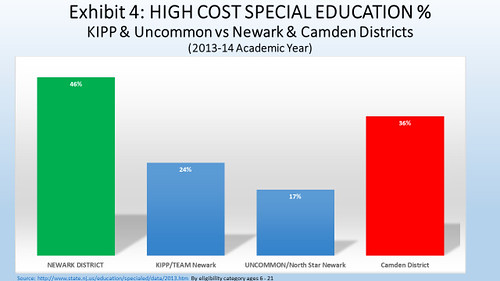 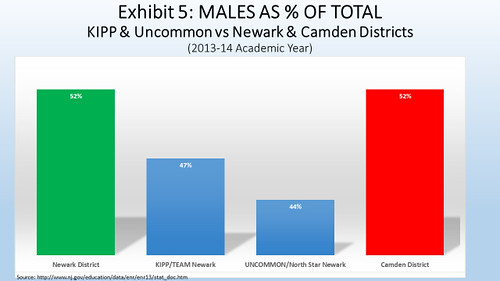 As with KIPP and Uncommon, the children attending Mastery – the third renaissance charter corporation – are much wealthier than the children of Camden.  The eleven charter schools Mastery currently operates, all of which are located in Philadelphia, have an overall Free and Reduced lunch rate of 81% versus 95% for Camden (Exhibit 6). 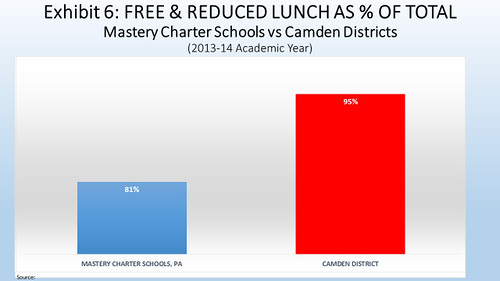 The experience of KIPP and Uncommon charter chains in Newark highlights that both have very high attrition rates, particularly for boys. 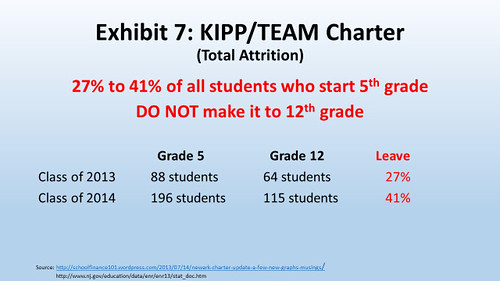 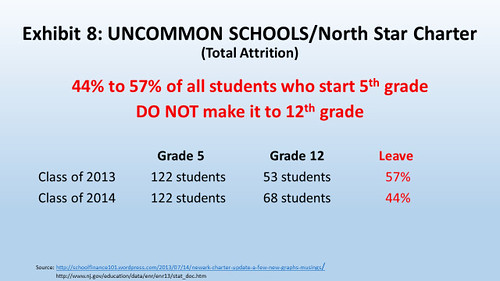 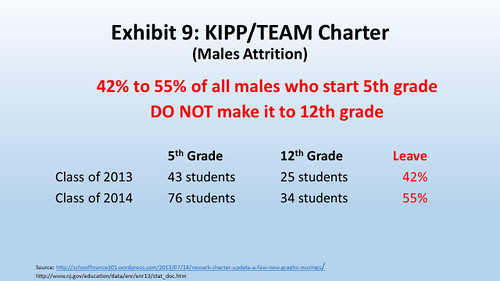 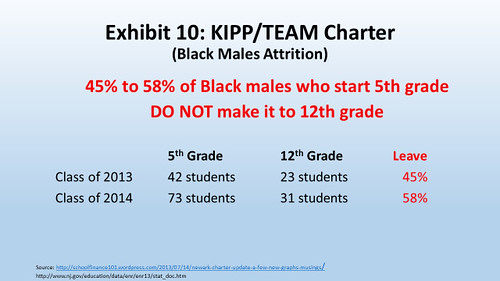 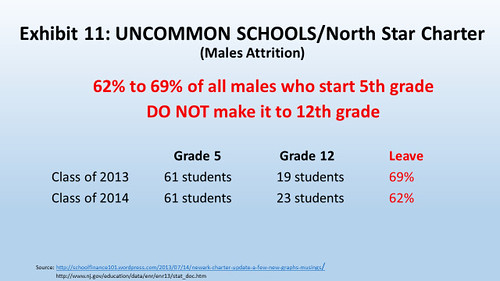 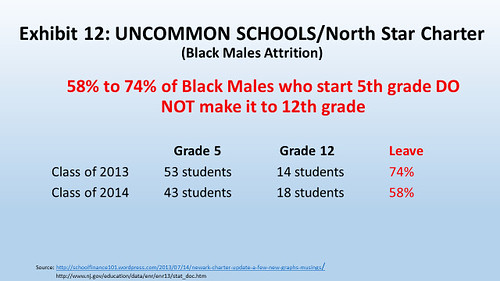 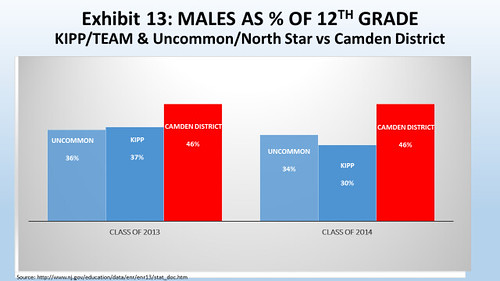 Charter corporations use rigid “NO EXCUSES” teaching and discipline techniques

The following description of “No Excuses” student management techniques was written by a former 3rd grade teacher at such a charter school:

The “no excuses” charter schools combine such rigid teaching techniques with harsh discipline. For example:

As Rutgers-Camden Professor Stephen Danley wrote so aptly, “It’s hard for me to … believe that militaristic, controlling techniques are in the best interest of students. This isn’t the type of education I loved as a student, it flies against everything I believe when teaching my college classes, and I would not send any child of mine to a school that emphasizes strict conformity over creativity.  But there is a group of entrepreneurs who believe the best way to teach minority, urban students is by controlling them, having them mimic instructors, and insisting on 100 percent compliance. And we have invited those leaders to teach in our city.”

*A fourth renaissance charter chain is likely to be approved next year, creating thousands of additional privately-managed educational spots within the district.