Revel Without a Cause 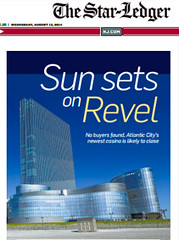 The headline says it all. The gleaming new jewel of Atlantic City, the hoped-for savior of a town that makes its living off of hope, off of worshipping golden-and silver and green-idols will sink slowly into the sunset on September 1, and along with it thousands of jobs, millions in lost tax revenue, and billions in debt.

A stark contrast to the tacky kitsch and schmaltz of casinos like the Trump Taj Mahal, Showboat and Caesars Palace, the sleek, sophisticated Revel was supposed to usher in a new era in Atlantic City’s revival and the state’s casino gaming experience.

An undulating steel blue wave cut by a giant shark fin, the Revel is the perfect metaphor for a pastime that dulls the senses like the beautiful but dangerous jellyfish so the great white can go in for the kill. Only this time the victim is not merely the hapless gambler with their bucket of quarters and free buffet pass; it’s the house-the people of New Jersey.

Along with the closings of the Atlantic Club, Trump Plaza and Showboat this year, Revel will take with it thousands of jobs (albeit low wage, part time jobs), and the hopes and dreams of so many up and down the political and socioeconomic spectrum. And no one in charge knows when or if the bleeding will stop. And what happens when there’s blood in the water? The sharks circle:

The city’s unemployment rate-13.1% in June- is likely to further climb, said Joseph Seneca, an economist at Rutgers University. By the fall, the city could face the loss of 8,000 of the 32,000 casino jobs it had last winter.

Moody’s, the credit-ratings firm, said the closure would hurt the city’s finances because Revel contributes about $20 million in property tax revenue. The firm downgraded the city’s bond rating to junk status last week and says further action could come.

[Mayor Guardian] is asking the state for additional aid and trying to cut spending. Mr. Guardian declined to comment beyond a statement issued by the city. (emphasis mine)

What’s the darling of spending cuts these days? My bet’s on public education-just what every low income child needs.

Gentrification for ‘other people’

But the arrival of casinos has not fixed the deep-seated social problems plaguing a city where nearly 30% of residents live below the poverty line. Unemployment remains high, at nearly 18% last year. Gangs roam in low-income neighborhoods, and the crime rate in 2011 was 107.2 incident per 1,000 residents, compared with 39.3 for Atlantic County.

And the very government agency created to help city residents has since changed its focus – to helping casinos attract more gamblers and visitors.

“The hardcore unemployed are a social problem. It’s not an economic problem,” said Whelan, who has taught in Atlantic City’s public schools for 35 years. “The help-wanted sign does not solve that problem. People don’t have the life skills, the job skills, to function in the workplace.” (emphasis mine)

Rolling the dice on the public dime

From the get-go, the casino was drowning in bad timing, terrible tragedy and plain ole bad luck. But with billions already spent, an economy in the tank, and investors jumping ship, Christie rolled the dice on Revel by pledging over $250 million in tax breaks to help finish the struggling project, and with it revive the state’s economy and create jobs, albeit many part time jobs that employees would have to reapply for every four years. Nothing screams employee appreciation like making them re-apply, and it’s a great way to keep wages low!

But while those tax breaks weren’t supposed to kick in until Revel turned a certain profit (which it didn’t), public pension money was invested with no such strings attached:

Canyon Capital Advisors, a California-based firm, is among a group of funds that stepped in and helped rescue the half-completed Revel when Morgan Stanley walked away from its $1.3 billion investment in 2010.

New Jersey began investing in Canyon Capital in 2007 with a $75 million commitment. In July 2011, the state Investment Council approved putting an additional $100 million in Canyon Capital, about five months after the hedge fund made its bet on Revel, and in the same month the state approved an incentive package to jump-start the project.

[Treasury Department Spokesperson Andy] Pratt rejected any suggestion that the timing of the investment was significant. He said the council was unaware of the hedge-fund involvement in Revel, and added that the decision was based on Canyon’s track record, which included a 31 percent return on the state’s 2007 investment.

Gaming Enforcement records show nine hedge funds, including Canyon Capital, have provided $304 million in financing for Revel in exchange for a hefty 12 percent rate of return and the power to assume up to 90 percent ownership of the casino after three years. Records from the state agency show the group was also given two seats on the casino’s five-member board.

The $304 million investment in Revel carries a high reward for the hedge funds, but significant risk as well. According to public documents, the hedge funds are considered second-lien debt, meaning they would be among the last to get repaid if the casino filed for bankruptcy or liquidated its assets. (emphasis mine)

I am not an economist, but I was scratching my head when I first read about this deal. Yes, sometimes riskier investments do pay heftier returns, and in the middle of the recession with the pension fund already greatly underfunded, those in charge decided to roll the dice because, according to this same report, the risk to the fund is supposed to be minimal:

Andy Pratt said the investment in Revel posed little threat to retirees and the $69.9 billion pension fund. He said the $200 million from the hedge fund represents less than 1 percent of the state’s total investment portfolio, and that the funds were sufficiently positioned to absorb any Revel loss.

The exposure to retirees from Revel is nearly impossible to determine from public records because hedge funds are not required to divulge their investments, and the state signed non-disclosure agreements with the firms.

“Even in a worst-case scenario, the risk exposure is minuscule,” Pratt said. (emphasis mine)

But the fact is that the state pension fund is losing money on this and there is absolutely no way to determine how much! For the past 20 years, the fund has been pillaged-not by police, firefighters, education professionals, state office or hospital employees who’ve been dutifully making their required contributions-but by Republican and Democratic elected officials alike. And yet, under Christie’s watch, the state takes a huge gamble and loses, but he travels the state this summer on a ‘No Pain, No Gain’ tour blaming, threatening, excoriating public employees for our ‘entitlement’ largess. His hypocrisy knows no bounds.

Whose Pain? Whose Gain? 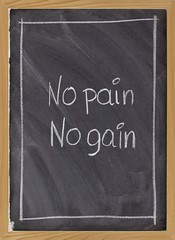 When most reasonable people who’ve watched their paychecks shrink or be eliminated have to choose between paying their bills or playing craps, they’ll pay their bills. Our state economy is still in the toilet, our roads and bridges are falling apart, our schools are falling down around students, and we could certainly use another commuter artery into Manhattan, so why are we investing in gambling as a way to boost the economy?

This is not rocket science, folks. The fact that four casinos are closing this year should be a huge red flag that many people simply don’t have that kind of disposable income anymore. Investing in the expansion of places of business that rely heavily on people losing disposable income in a down economy just doesn’t seem logical. And who suffers? Who always suffers when Gov. Christie puts his needs and the needs of his wealthy supporters first? Here’s a recap: