Other People’s Cities: In Camden education reform and gentrification go hand in hand

I asked Keith to post this here when I saw it at the excellent EduShyster blog. Keith is a teacher at Camden HS and a doctoral student at Rutgers University. He chairs the public relations and media committee for the Camden Education Association. Cross-posted at EduShyster – Rosi 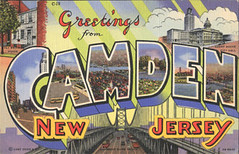 In case you missed it, Camden, NJ will soon be home to a brand new practice facility (*we’re talkin’ about practice!*) for the Philadelphia 76ers that will cost taxpayers $82 million. What does Camden get in exchange for this princely sum? Fifty seasonal-read low-paying-sales and marketing jobs. This news comes on the heels of the layoffs of hundreds of teachers and staff from the Camden Public Schools. If you’re wondering about the priorities of a city that can’t afford to pay its teachers but can somehow spring for the biggest and best practice facility in the US, you’re not the only one; I’m feeling confused and angry about the direction of my city these days.

What’s happening in Camden isn’t unique. The city is being forcibly changed to cater to those who DON’T live here. Read the work of academic researchers and practitioners like Pauline Lipman of the University of Illinois at Chicago, Valerie Kinloch of Ohio State University, Leslie T. Fenwick of Howard University and Stephen Danley of Rutgers University-Camden and you’ll encounter similar stories from other cities. In Camden, a City for Others, Danley writes: This city is not designed for its residents. And its residents know that.

It’s as if the city so desperately needs people with disposal income that those who have it are catered to relentlessly. And underneath such puzzling interactions is a deep frustration that much of Camden is not designed for its residents because of their low incomes…The message to local residents is clear: The nice things here aren’t for you. We need other people.

Understanding that statement is critical if you want to understand what is taking place here in Camden both educationally and demographically.

Whose schools? Whose city?

In places like Chicago, Washington DC and now Camden, urban public school reform is the tool, not for improving the educational experiences of low-income minorities, but for mayoral-initiated gentrification. Lipman and Fenwick have done extensive research on the urban public school reforms of school closure and the establishing of authoritarian, politically-connected corporate-run charters. Both have found that politically-endorsed education reforms have much more to do with reappropriating urban space in order to attract young, childless, middle-class white professionals than with improving education for poor and working class black and Hispanic children.

Gentrified Camden-a City for Others-is taking shape through a series of mayoral initiatives. There’s *Live Camden* that aims to lure new home seekers to the specific neighborhoods of (white) Cooper’s Grant and the (increasingly white) Downtown Area near Cooper’s Hospital. And don’t forget the Eds and Meds plan that establishes educational and medical corridors through vast swaths of the city through buyouts and eminent domain. Meanwhile, the mayor’s request that our public school district to be taken over by the state resulted in an influx of young six-figure earners who, not surprisingly, reside in Camden’s posh Victor Building far away from the experiences and realities of the vast majority of city residents.

At every turn, the mayor and the leadership of Camden start with the assumption that the solution to our city’s problems lies in the hands of outside others. Hence our city leaders are now placing their hopes in corporate-led charter school chains, like Mastery Charter Schools, UnCommon Schools and KIPP (please YouTube some clips of their respective pedagogical techniques), to be staffed with mostly white Teach for America corps members who will only temporarily fill the role of teacher to children desperately needing quality educational leaders and stability. This despite the fact our public schools serve a citizenry mired in generational and concentrated poverty (due largely to historic discriminatory housing and employment policies and inherent structural inequality) that greatly affects students’ scholastic outcomes.

For too long and by too many people, Camden has been considered a place to move from rather than live in. Today, instead of catering to and rewarding those who have shown a commitment to stay and live here, the mayor and the city’s elites look past the residents already here. And so it goes. As Danley wrote: *The message to local residents is clear: The nice things here aren’t for you. We need other people.*