Take a stroll. Enjoy a decaf macchiato. Do some yoga, And stop reading the newspaper, which these days seems to be full of pieces by some more of our fellow worried white people — in this case, the very reformy and very white Tom Moran — designed to make us very, very… concerned:

Now Newark has a new mayor, Ras Baraka, a charismatic politician, a street activist, and until now a high school principal and city councilman. He just beat the dominant machine in Essex County through sheer force of will, on a shoestring budget. He is aggressive, populist, and he owes nothing to the machine.

And now he’s promising to turn his convincing win at the polls into a movement.

“Years from now when we look back on this day, let us say that this was the day that we all decided to fight back,” he said at his inauguration ceremony on a steamy Tuesday afternoon at the New Jersey Performing Arts Center. “Yeah, we need a mayor that’s radical.”

I want to believe in this man, and anyone with half a heart has to want him to succeed. The stakes, quite literally, are life and death.

But I worry. Baraka is an admirer of former Mayor Sharpe James, and even lauded him during the inaugural address. “People love him,” Baraka said later.

Okay, but James betrayed the people of this city and went to jail on corruption charges. He’s no role model.

Oh, dear: it appears that a black man who actually won an election without sucking up to Wall Street and Silicon Valley hasn’t met the standards of worried white people in condemning his predecessor. Because, after all, it’s not like politicians endorsed by white pundits have a history of ignoring the despicable behavior of their previous political patrons…

Golly, this uppity behavior is so upsetting to us white people. I hope it doesn’t spread west:

So Karen Lewis, the hard-nosed leader of Chicago’s teachers union, now admits she’s interested in running for mayor, backing off earlier declarations of “no way” and telling the Sun-Times that she’s “seriously looking” at jumping in.

If she is serious – and even Mr. Emanuel finally has learned to take what Ms. Lewis says very seriously – I have some equally serious advice back to her: Be really, really careful, both for the city and for yourself. As Harold Washington would have said, this ain’t beanbag.

I have no particular love or allegiance for Mr. Emanuel. He’s handled a lot of things well but stumbled badly on others. Like all government leaders and, frankly all of us, he does best when he has to look over his back occasionally at snapping competitors. And to the extent you believe the polls, a lot of Chicagoans want to see some competition for him in the Feb. 25 election. His numbers are soft, especially among African-Americans, for whom Mr. Emanuel’s former job as chief of staff to President Barack Obama is more and more irrelevant.

I can understand why the president of the Chicago Teachers Union would want the opportunity to get on the big stage and draw attention to her take on why Chicago is headed in the wrong direction under Mr. Emanuel. If nothing else, her running would force aldermanic candidates to pick sides, and maybe result in the election of more independents to the City Council.

But Ms. Lewis, frankly, needs to dial down her public persona. She’s a bright, sophisticated, erudite woman, with a side few voters have seen. But in a public showdown, she almost makes Mr. Emanuel seem tame and restrained, and that’s quite a trick. He gets her Irish up, so to speak.

I find her too quick to reduce every dispute to racial terms. That’s dangerous ground. I also find her proposed solutions to the city’s fiscal woes to be far too focused on squeezing the well-off and far too light on growing jobs and the economy.

Yes, Greg Hinz really did write, in a column about how Karen Lewis needs to moderate her words on race, that Rahm Emanuel “gets her Irish up.” That’s a special kind of cluelessness, folks.

And then Hinz admonished her for wanting to “squeeze the well-off,” because, as we all know, it’s a true fact that not taxing the rich creates tons o’ jobs, except when it doesn’t, which is pretty much all the time…

Then Hinz tries to patronize Lewis, conceding that she is “a bright, sophisticated, erudite woman, with a side few voters have seen”. Well, yeah, Hinz. I know this may shock you, but thousands have seen it. She is after all, a SCIENCE TEACHER. Hinz goes on to admit that Lewis, “has done a terrific job in uniting her union, getting a much better deal in the 2012 contract than business reformers wanted.” I say admit, because it was just about a year ago when Hinz was dissing the CTU leader for being a poor negotiator and putting the onus on her, rather than on Rahm for the closing of 50 neighborhood schools and for the massive teacher lay-offs that have followed.

We should thank Greg Hinz and Crain’s for tipping the hand of the 1%-ers. Now we know what their angry-black-woman line of attack will be, should Lewis dare to enter the lion’s den of mayoral politics. Not bean bag to be sure. But knowing Karen Lewis, I don’t think Hinz’s dangerous grounds warning is going to intimidate her or dissuade her from taking on the Little Emperor who now sits unchallenged on the 5th floor of City Hall.

Amen. I’d only add that, as we’ve seen with Ras Baraka, the racial condescension will only get worse if Lewis manages to beat Emanuel. If she wins, Karen Lewis — just like Ras Baraka — is certain to endure an entire term of worried white people writing in newspapers and blogs that she needs to “tone it down” and think about “all of her constituents.” And that is nothing more than code for saying: “Don’t stand up for the people who put you in office because they are fed up with the status quo.”

Thankfully, I’m sure that Lewis, like Baraka, won’t be taking that particularly bad piece of advice.

Lewis, of course, has a double-whammy against her: she’s also a woman. So if she gets into the race, we’re sure to also hear all sorts of fretting that she’s just too “hysterical,” and we’ll get lots of snarky comments about her looks, and most likely the worriers will throw in some of that special ageism leveled at women who dare not to know their place.

What we won’t hear very much about is whether her message might actually resonate with voters:

If the mayoral election were held today, the lightning rod union leader who was the architect behind a 2012 teachers’ strike would beat Emanuel by 9 percentage points in a head-to-head contest, the survey found.

Lewis was leading Emanuel 45 percent to 36 percent with 18 percent of the likely voters undecided.

Why do I get the sense that this is what worries the worriers more than anything else? 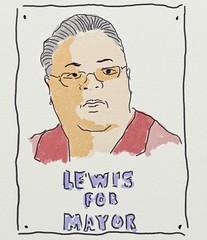 H/t the always excellent Fred Klonsky. I wish I could draw…

ADDING: I try to go back to posts after they’re out for a bit, because I’m my own editor and I find that I need to step away from the blog for a bit if I’m going to come back with fresh eyes so I can fix errors.

So this go ’round, I was clicking on links and noticed I messed up the “special ageism” link: I had it go to the Hillary Clinton-hysteria piece in Slate again, rather than this post about how the Boston Herald repeatedly calls Senator Elizabeth Warren “Granny.” To fix the link, I had to do another search on Warren being called “Granny.”

And that’s when I saw this:

I’m not the most PC kinda guy you’ll ever meet. I’ve seen every James Bond movie at least three times. I thought Howard Stern was usually pretty funny (haven’t heard him since he moved to satellite). I think It’s Always Sunny in Philadelphia is really funny.

But this isn’t just sexist and ageist — it’s just plain old stupid. Elizabeth Warren, one of the most erudite senators we’ve had ever, “dresses like the ‘before’ woman in a beer ad”? She should dress…what? “Hotter”? Less like a senator? Is her fashion sense really that different from Barbara Boxer’s? Does anyone care?

Bill Maher got tenure completely wrong earlier this year, but I always thought — even when I disagreed with him — that he was a fairly smart guy. I don’t watch HBO (no premium cable, no Sirius-XM — you’re quite the cheapskate, Jazzman), so I can’t say I’ve got a particularly well-informed opinion about his comedy, but in interviews and YouTube clips he comes off as snarky but thoughtful.

But this is the sort of facile sexism and ageism that really makes my skin crawl. And no, it’s not the same as making fun of John Boehner’s tan, even though that’s also a bit of a cheap shot. But at least his tan is anomalous; Warren’s hair and clothing are exactly what we’d expect from a senator. For this, she’s ridiculed. Seriously?

Fellow old, white guys: we have a lot to contribute to this country and this world. But we’ve got to start upping our game a little. A little introspection goes a long way. I’m not saying we should be humorless robots; I’m just suggesting we man up a little and think a bit before we speak.

It’s perfectly fine to make jokes about Elizabeth Warren: she’s a powerful person (yes, she is — she’s a United State Senator, for crying out loud), and authority needs to be questioned, and I am very much down with using satire to make hamburgers out of sacred cows.

But mocking her for dressing like a mature and serious woman? Really? That’s the best we can do?