After this happened in Paterson today, Christie had some trouble with people who disagree with him at his “town hall” in nearby Caldwell and ejected some he didn’t want to hear from. – Rosi 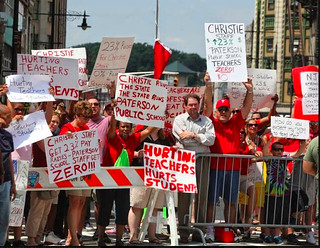 Apparently Gov. Christie heeded the old saying, “If you can’t take the heat, get out of the kitchen” and high-tailed it out of the Silk City after uttering about 25 words in his swearing in of Mayor Jose Torres. But I don’t think it was the typical Jersey-style summer-in-the-city, +90° hazy, hot and humid weather that forced him out. No, I think it was the approximately 50 Paterson education professionals who showed up armed with their best teacher voices to protest. Clad in red shirts to symbolize Trenton’s bleeding of the school district, they were there to deliver a message to Gov. Christie: state control is hurting their students, their schools and profession, and forcing many education professionals out of their jobs because they can no longer support their families and pay their bills. 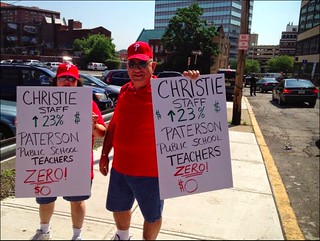 Armed with signs that highlighted among other things, the 23% raise he recently gave his staff (because apparently they’ve taken on more of a workload-and the rest of us haven’t), the educators repeatedly chanted, “Christie’s got to go!” One woman, who asked to remain anonymous, told me she is thinking about leaving the profession because she just can’t afford to stay in it. “I haven’t had a raise in 4 years; my paycheck is getting smaller; I’m struggling to keep a roof over my head; and the amount of work I now do is overwhelming. There’s got to be a better way. I love what I do, but I have a family. I can’t work for free.”

The Paterson Education Association and the state did reach a tentative contract deal in the spring, which the association is now in the process of ratifying. But some of those I spoke with in the crowd are not happy with it. They feel it’s dividing the association with different salary guides and retro pay for different job descriptions and degrees/certifications.

A couple of things for the record: