Why Do We Need Tenure? Ask Belleville’s Teachers

In the wake of the truly awful Vergara decision, there have been plenty of reformy types crowing that we just don’t need teacher tenure any more. “There are more thsn enough of protections for teachers against vindictive administrators and school boards!” they claim. “Tenure just isn’t necessary!”

These people need to take a trip up the Garden State Parkway and visit Belleville, NJ — home of the most egregious example of why teachers need tenure I’ve ever witnessed. 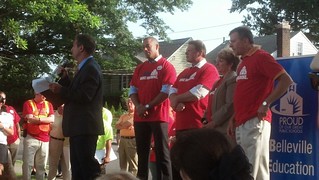 This evening, I’d estimate easily a thousand people gathered on the grounds outside Belleville High School to rally to the aid of the president of the Belleville Education Association (the local teachers union), Mike Mignone.

Included in the crowd were the entire NJEA leadership, including current president Wendell Steinhauer and former president Barbara Keshishian; teachers union leaders from 12 different counties; teachers union leaders from Newark’s NTU; the president of the Belleville Fireman’s Association and many of his members, truly Belleville’s Bravest; hundreds of teachers from literally all over the state; and concerned parents and students from Belleville, a town that is seeing its dedicated teachers pay the price for its school board’s and its superintendent’s incompetence.

They were there because, ultimately, they have all had enough.

It’s going to take a series of posts to tell the entire tale of how Mike Mignon has become New Jersey’s poster boy for tenure: the story is so twisted and so disgraceful a single piece can’t possibly do it justice. But let’s start by giving you the basics, which I will flesh out over the next few days.

To put it charitably, Belleville’s schools have been very poorly managed. The district’s budget is so bad that the state appointed a fiscal monitor this year to try to restore some financial sanity. Teachers and parents both told me that the schools lack contemporary textbooks, modern computers, and even the infrastructure necessary to administer the Common Core-aligned PARCC tests mandated by the state for next year.

Perhaps the worst decision the district made over the last few years was to install a state-of-the-art surveillance system in all of its buildings; yes, a “surveillance” system, not a security system. Every classroom in every building is wired for both video and sound — including the teachers lounges!

That’s right, my fellow teachers: in Belleville, a camera and microphone monitor every word uttered in the teachers break room!

But that’s not all: all Belleville faculty, high school students, and middle school students must have special ID cards with them at all times. These ID’s include “RF-tags,” which are radio frequency devices similar to what you’d find in an EZ-Pass. They were originally used to track cattle: now, they track the positions of all staff and all students at all times.

That’s right, my fellow teachers and parents: in Belleville, the movements of students and faculty are tracked at all times! Big Brother better not find out if you snuck off to the bathroom before the bell…

I asked several parents at the rally whether they were ever asked for their permission to require their children to have an RF-tag on them at all times; every one told me they were never asked. The teachers, it goes without saying, find the entire system insulting and degrading, to both themselves and their students. According to a union survey, more than half of the members of the BEA feel intimidated in the workplace, and three-quarters felt their participation in union activities would result in negative consequences.

Regular readers of this blog will not be surprised when I tell them about the resume of Belleville’s superintendent, Helene Feldman: she cut her teeth — surprise! — at the NYCDOE, under reformy Joel Klein and reformy Chris Cerf (and those are a couple of guys who really know how to get teachers and parents on their side…). NYC is, of course, the training ground for the increasingly unpopular Paymon Rouhanifard in Camden and the spectacularly unpopular Cami Anderson in Newark.

Only a superintendent who served under Klein and Cerf would ever think teachers would take kindly to having their classrooms and lunch breaks and bathroom trips monitored.

The real kicker here, however, was the price: $2 million dollars. Just tonight, the state-appointed accountant who looked at Belleville’s budget told the crowd at the board meeting that the district was $3.6 million in the red for next year — and that’s after having used up all of its budget surplus. How in the world does the Belleville BOE justify spending all that money on this obnoxious surveillance system when they can’t even afford textbooks and computers for the schools?

When the system was booted up this past fall, the teachers union decided they’d had enough. It was bad enough the board wasted this money on invasive technology that wouldn’t do anything to stop a Sandy Hook-like attacker. It was bad enough that teachers were now being watched constantly, as if they worked in a Soviet reeducation camp. But all of this had been implemented without the benefit of any negotiation, a clear violation of the collective bargaining rights of the BEA.

Mike Mignone, as president of the union, started speaking out. A 13-year veteran math teacher with a spotless record, beloved by his students and fellow teachers, Mignone wasn’t going to just sit by and watch his members continue to be harassed and intimidated. He demanded that the board and the superintendent explain themselves: where did they get the funds for the surveillance system? Why was the time between the advertisement of the bid and the final decision less than two weeks? Why did the entire bidding process stink of nepotism?

After it obtained the job, Clarity also hired relatives of two key people at the school district, the brother of school board attorney Alfonse DeMeo, who approved the contract and first introduced Clarity to board members; and the son of Board of Education Trustee Joe Longo, who spearheaded the security upgrade. Longo insists he never asked for special treatment for his son and Kreeger denies that politics were involved in either hire. Kreeger also says he eventually terminated Longo’s son because of public criticism, even though he was a model employee. [emphasis mine]

Mignone was making things very uncomfortable for the board and the superintendent by speaking out. He was putting a lot of people in difficult positions by calling for transparency and demanding that taxpayers get clear answers about how their money was being spent.

Guess what happened next?

As Mignone’s lawyer puts it: in October, he found out; in November, he spoke out; in December, tenure charges were filed against him. Mignone, who had always had excellent reviews, suddenly found out he would be up on charges that included (get ready for this one) answering students’ questions about the surveillance system. According to Mignone, his students asked him questions about whether they were being monitored; he took a few minutes out of class and gave them some honest answers. That, in this board’s and this superintendent’s minds, counts as a fireable offense.

Golly, I wonder how the board knew Mignone had talked to his students about whether someone was listening in on their classroom conversations…

Mignone was suspended with pay for three months; as of this spring, he has not received any pay, pending his hearing. The case, of course, is utterly absurd: any arbitrator who upholds the charges would have to be insane. Which is exactly the point:

If New Jersey didn’t have tenure laws, Mike Mignone would have been fired on the spot — all for the sin of daring to stand up for the taxpayers and teachers of his town. Mignone’s case is the perfect illustration of how tenure not only protects teachers, but also taxpayers.

There is so much more to this story: I could write a movie starring Joe Pesci after everything I heard tonight. But I’ll just add one more thing before closing this chapter: 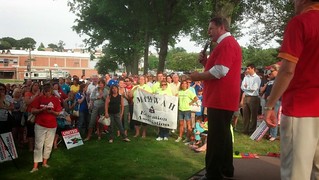 Tonight was amazing. Not only was the Belleville community out in full force: there were teachers in their local union shirts from Mahwah, Glen Rock, South Brunswick, Summit, Ramsey, Bergenfield, Mercer County Vo-Tech… everywhere around the state. It was an amazing show of support for one man who has been grievously wronged by trying to do right.

When they go after one of our own, we all have to get together and say: “Enough.” When a good man and a good teacher pays a price for speaking out, we must all demand that justice be done. We simply can’t afford to stand by idly anymore and let others fight for us. We must have each others backs — all of us.

Lord knows I can’t go to every rally and every union event; no one could. But we all have to start stepping up our game. We have to make the commitment to do whatever we can to help out each other. All hands on deck.

Our students and our families deserve no less. As does a hero like Mike Mignone.

ADDING: It is so enormously gratifying when you come up to me at these things and tell me you enjoy this blog. So many of you were so generous with your kind words this evening. Many, many thanks.