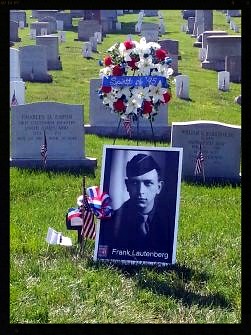 Frank Lautenberg died one year ago today. He was the last seated member of Congress who served in WWII, and there won’t be another. I didn’t know him as well as some of my friends. But I thought he was a sweetheart.

I got to talk to him in depth a couple of times, once commiserating about the loneliness of progressives in Hunterdon County, where I live. I told him we weren’t so lonely; we had at the time the largest DFA group in the state.

Years later, Frank Pallone and I had the pleasure of double-teaming DFA Chair Jim Dean into endorsing Lautenberg (a national DFA endorsement) when Rob Andrews decided to primary him. Jim had already decided to stay out of the race. But Pallone and I pretty much ran an intervention on Jim to convince him. DFA members in NJ wanted that endorsement, and Lautenberg absolutely deserved it.

I liked Lautenberg a lot. The couple times I spent time with him he smiled easily and told great stories.

I liked Rob Andrews, too. But his record of helping George Bush convince Democrats to support the Iraq War raised judgement questions for me. That, and no Andrews supporter I ever talked to had anything beyond the usual South Jersey parochialism as a reason. Lost some friends over that one.

And I like Cory Booker. Nice guy. But he can’t fill Lautenberg’s shoes.