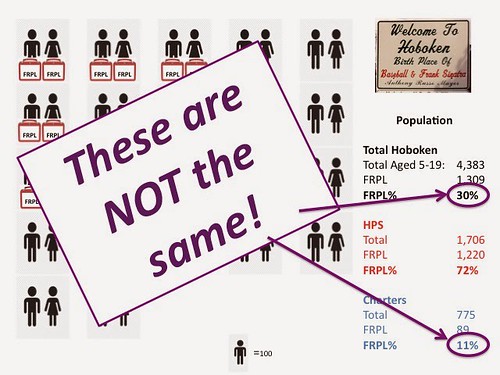 But that hasn’t stopped the local charter boosters from engaging in all sorts of mental gymnastics in an attempt to rationalize this segregation. They’ve tried to make the case that the charters reflect the overall demographics in the city; but when you look at the data and make the most generous assumptions possible, that’s clearly not the case.

And now we have a new argument: the charters aren’t really increasing segregation, because the proportion of students in Hoboken’s public schools who are economically disadvantaged is decreasing.

I have been able to obtain from the New Jersey Department of Education/Office of Finance the 1997-2013 “October 15th” Reports or the Application For State School Aid (ASSA). In order to be as consistent as possible, for my analysis I used what is commonly considered the “Line 39” data for FULL ON ROLL as well as RES LOW INCOME to obtain a fair approximation of the percentage of low income students attending the traditional Hoboken Public Schools. This method allows for excellent consistency over the many years of data and gives a good estimate of the proportional percentages.

No doubt, this will not be the final word on the topic. That is not the intent of this post. And plotting such data is not the only way to support or disprove the conjecture. But I do think this analysis offers some compelling evidence that the addition of charter schools into Hoboken has not had a tangible segregative impact in terms of low income student enrollment on the traditional public schools. This may be due in large part to historic high low income enrollment in Hoboken’s public schools going back many years.  On a related note, it appears that any claim of a possible segregative effect of charters on the traditional public school enrollment in Hoboken NJ has failed to take into account the historical “set point” of the district which appears to be in the neighborhood of about 60.76% low income enrollment with a standard deviation of about 5.52%. There are also a number of city wide demographic trends occurring that may be impacting these percentages– a general but persistent rise in the average family income over time in Hoboken is certainly proven by census data. Such a trend should be possible to observe over a 15+ year period. Additional analysis with more historical data should be forthcoming.

Let’s start with this: I don’t know where the author got his data or what exactly he’s looking at, but if it has to do with state aid, it probably is dealing with resident enrollment, and not HPS enrollment. Which means it includes the charter school students. Again, I can’t say for sure without seeing it myself.

In any case, it really doesn’t matter whether the graph above shows just HPS students or combined HPS and charter enrollment. Even if the enrollment of economically disadvantaged students decreased within the public schools, there can still be patterns of segregation within the charters.

Let’s use some publicly available data to make this point: everything that follows comes from the NJDOE’s enrollment files. 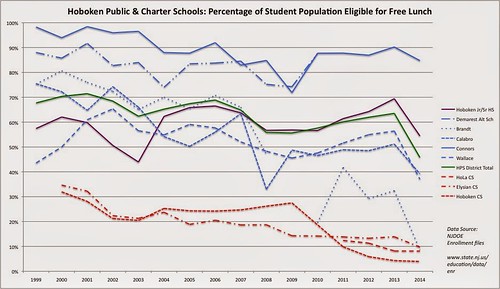 Click to enlarge; the year given is the ending part of the school year (e.g., 2014 = 2013-14). Charters are in red; district average (not including the charters) is in green; Hoboken Jr/Sr High is purple (we shouldn’t compare the charters to the high school population because the charters don’t have high school students and FL numbers tend to vary depending on grade level).

There’s only one public school in Hoboken that comes close to having the historically low proportion of FL-eligible students found in the charters: Brandt, which is an early childhood center that only serves Pre-K and Kindergarten students (this school is, to my mind, a very interesting story that I hope I’ll get to later).

Aside from Brandt, every public school in Hoboken serves a far greater proportion of economically disadvantaged students than Hoboken’s charter schools — and it’s been that way for 15 years.

Yes, there has been a downward trend in FL eligibility — but that’s a trend that is also reflected in the charter schools. In other words, even as overall economic disadvantage has waxed and waned in Hoboken, there has always been a “poverty gap” between the charters and its public schools.

And that’s not the only gap in Hoboken’s schools: 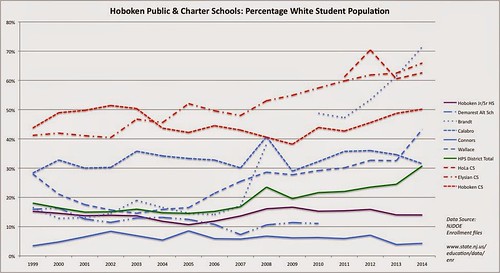 Again, Brandt is the outlier, almost certainly because it only serves Pre-K and Kindergarten children. Historically, Hoboken’s charters enroll a greater proportion of white students than the public schools (Brandt excepted).

It’s very interesting that Hoboken HS and Connors Elementary have had relatively flat white populations while Wallace’s has steadily risen over the last decade (and Brandt’s has exploded — again, there’s a story there…). That the district as a whole has seen its white population rise while the high school’s stays steady gives us a clue about the overall education patterns in the city.

But the charters are the real story. Calabro once nudged Hoboken CS in 2008, but then sank like a stone the next year; meanwhile, HCS’s white population grew steadily since 2009. Elysian’s white population has steadily climbed, and HoLa’s was high to begin with and has stayed that way.

Hoboken’s charter schools do not serve the same population of students as its public schools: the student bodies are different, both racially and economically. And it’s been this way for decades.

You can twist and turn and spin and contort all you want, folks, but them’s the facts. At some point, Hoboken is going to have to have an honest conversation about this. 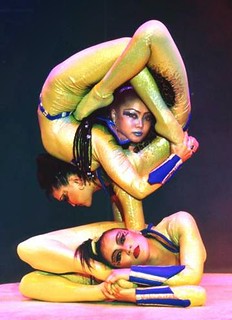