If you believe that America is a democracy, you must also believe, a priori, that Newark, NJ, is not part of America.

For the last couple of weeks, it has become painfully, disturbingly clear that Newark — like many other communities populated by working-poor and working-class people of color — operates under a set of circumstances that simply wouldn’t be tolerated in a free, democratic society:

– Democracies allow for full participation in governance by all people, regardless of their class status; Newark, however, is currently being threatened with the loss of its autonomy simply because it is an impoverished community.

When Newark’s current interim mayor, Luis Quintana, dared to defy the state and hire his own appointees to run the city, Trenton decided the best course of action was to threaten to take over city hall. I wonder if Chatham’s or Sparta’s mayors have ever faced similar threats…

Some will argue that corruption in Newark is so bad that it requires state intervention and the disenfranchisement of the city’s voters. Funny, I didn’t hear many people make similar arguments about Toms River. Even Ridgefield escaped a state takeover; the threat would have gone away immediately had its mayor (later acquitted on corruption charges) resigned. 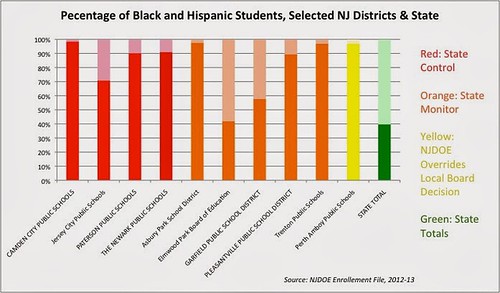 – Democracies support the development of a middle-class; Newark, however, suffers from segregation, taxation, and economic policies that all but guarantee that many of its citizens will remain mired in poverty.

You’ll often hear that New Jersey is a high-tax state. The issue is far more complicated than that — we’re also a high-income state, and many of the taxes we pay don’t stay here — but the most important thing to understand is that we are a regressively taxed state: 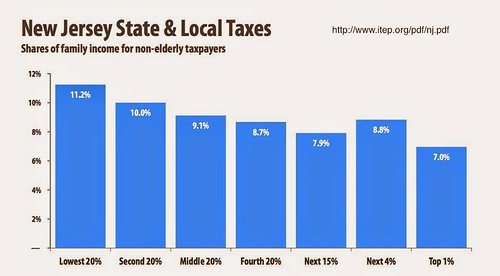 This creates a disadvantage for communities like Newark, especially when the state’s wealthiest families have essentially sequestered themselves away in economically segregated towns. Like much of the rest of the country, New Jersey has engaged in practices that create homelands where working-poor people of color are allowed to live.

We then stand shocked — shocked, I say! — that these cities can’t raise enough revenue to support themselves. We stand amazed that there sometimes is corruption in these cities, as if the system itself didn’t create the conditions for that corruption.

– Democracies allow citizens to direct the education of their children; Newark, however, allows its citizens no say in how its schools are run.

If you read this blog, you know the story of state-appointed superintend Cami Anderson and how she has lost the trust of just about every stakeholder in Newark’s schools. Apparently, no one has seen neither hide nor hair of Anderson for some time, even as her One Newark plan has come crashing down around her.

There’s no doubt that elected school boards can and do make mistakes when choosing their superintendents. But those boards are also quick to act when the pressure builds from their communities to replace school leaders who don’t have the confidence of parents, teachers, and students. Newark, however, has its schools run by a superintendent who answers only to Chris Christie, a man the city overwhelmingly rejected in the last election. It doesn’t matter what Newark’s stakeholders want; all that matters is what Christie wants.

If that isn’t anti-democratic, I don’t know what is.

– Democracies engage in elections where campaign financing is transparent and driven by the citizens affected by the elections; Newark, however, is engaged in a mayoral race dominated by shadowy interest groups outside the city.

I guess we can’t single out Newark too much on this; after all, campaign finance laws are a joke across the country. Still, it’s stunning how much outside money has come into this race. As both Bob Braun and Mother Crusader have reported, the school privatization industry is pouring millions into Shavar Jeffries’s campaign coffers, all with the goal of dismantling the Newark Public Schools and replacing it with a “choice” system that substitutes democratic oversight with consumerism.

Let’s be clear: “choice” is not democracy. Affluent suburban communities in New Jersey have fought long and hard to keep “choice” out of their districts; that is their right in a democracy. Newark’s citizens, however, have had a system of segregating charter schools dumped on their heads with no say in the process.

If school “choice” is so wonderful, why won’t New Jersey’s reformy plutocrats allow Newark’s citizens to “choose” for themselves whether they want to turn over their schools to private management? Why does the “choice” for charter expansion rest in the hands of unelected bureaucrats, and not with the elected representatives of the local community? Do reformy types have so little faith in the attractiveness of their ideas that they are afraid to put them before a vote of the people who must live under their policies?

– Democracies have a press that serves the people, advocates for their rights, and speaks truth to power; Newark, however, has a hometown newspaper that has cynically given up any pretense of serving as a civic institution.

This morning’s twisted endorsement of Jeffries by the Star-Ledger is almost as bad as the paper’s previous endorsement of Christie. Bob Braun appropriately excoriates the S-L for its attack on Jeffries opponent, Ras Baraka. I’ll add only this:

The S-L is quite correct in suggesting that this race has become a referendum on Anderson and the two-decade control of Newark’s schools by the state. But the notion that One Newark is a “serious” reform plan, and Baraka’s is not, is absurd.

Unlike Tom Moran, op-ed editor of the S-L, I’ve both read Baraka’s education plan and studied One Newark. Baraka has not called for shutting down the Newark charter industry; he has, instead, called for adequate resources to be invested in schools that are democratically controlled. He has called for bringing all of the stakeholders of Newark together to reform schools, including building a coalition of both charter and public school parents. His plan is modeled on the Newark Global Village Zone, a program developed by noted education scholar Pedro Noguera — a plan that was abandoned by Anderson and Christie in favor of One Newark.

One Newark, in contrast, is both illogical and innumerate. It turns over neighborhood schools to charter managers who have never proved they can serve the same populations of students better than NPS. The delays in informing families about their “choices” proves the district never developed the capacity to pull it off. And I’d even argue that One Newark is bad for the planet, increasing the carbon footprint of the city by shuffling children all over, rather than keeping their schools within walking distance.

The S-L editorial board has never bothered to inform itself, let alone its readers, about these realities. In a democracy, the press sees itself as a fair, informed arbiter of the truth. If Newark has one of those, it’s certainly not to be found in the op-ed pages of its hometown paper.

The last thing the good people of Newark need is another outsider telling them how to vote. It’s quite clear what’s at stake in this election; Newark doesn’t need me to elaborate any further than I already have.

But the rest of us should be watching what happens this week. Shavar Jeffries may well be a good man, but his campaign has become a symbol of everything that is wrong with our politics these days.

If Jeffries wins, it’s a confirmation that America’s cities — the ones where working-class people of color are allowed to live —  are being ruled from the outside. Jeffries election will confirm these cities’ institutions have been co-opted for cynical, self-serving interests, fully at the service of political machines and plutocrats. It will confirm that cheap political shots — like the attacks on Baraka’s family — actually work, especially when they replace serious discussions of the issues.

I won’t for a second make the case that Ras Baraka’s election will transform his town. The forces that create cities like Newark are large and powerful; they have a vested interest in the real status quo, and they will only be contained when people of good faith, both in and out of Newark and her sister cities, no longer keep their revulsion at the abandonment of these communities in check.

But Baraka’s election would send one powerful message: that there is still a place in our politics for people to gain autonomy, no matter their color, economic class, heritage, faith, or sexual preference. Let’s hope we haven’t sunk so far that people, no matter who they are, can’t still enjoy some small measure of self-determination. 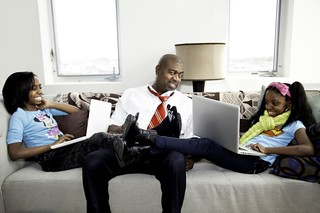