The next few weeks should determine whether there is actually going to be a Democratic primary race for the open Senate seat in New Jersey, or whether Cory Booker will simply stride to Washington with token opposition. Representatives Frank Pallone and Rush Holt are Booker’s only serious opposition, but each trails the Newark mayor by more than 40 points.

I’m watching this race carefully because, as my regular readers know, Booker is one of the reformyest politicians in New Jersey, if not the country. He supports school vouchers (but not health care vouchers – hypocrite), loves charters, thinks merit pay for teachers is a great idea, wants to do away with seniority, and seems to have no problems with error-prone test-based teacher evaluation. He accepts scads of money from edu-vultures like Andrew Tisch of K12 Inc., yet thinks that the teacher payroll in Newark is too big.

Cory Booker, in short, is one of the least friendly politicians to public school teachers and public education in the Democratic party. His election to the Senate would undoubtedly mean the upper chamber would gain yet another acolyte for SecEd Arne Duncan and his failed policies.

So I’m looking for some indication from Holt and Pallone that they are willing to distance themselves from this nonsense. As Bob Braun – formerly of the Star-Ledger, currently advising Holt – pointed out on his blog, Holt and Booker differ on vouchers, which is admittedly no small thing. Braun, however, went a step further and chided the NJEA for not getting behind Holt solely on the basis of this difference.

As I pointed out in a comment, however, I can’t see how NJEA would want to further isolate themselves from Booker if vouchers are the only difference between him and Holt:

Further: I’ve been trying to find out where Holt stands on Race To The Top. So far, I’ve heard nothing. I’d feel a lot better about you taking NJEA to the woodshed for not getting behind him if Holt came out forcibly and said RTTT is a disaster, SecEd Arne Duncan should be fired (he should), no more federal money should go to TFA, the proliferation of charters needs to be halted (especially for-profit charters using non-profit shells), standardized testing needs to be pulled back, Common Core needs to be vetted before it’s implemented, test-based teacher evaluation is an affront to mathematics and social science research, etc.

That last one particularly irks me. If anyone in this race should understand the obvious defects of VAMs and SGPs and all the other junk science being used to push teacher “accountability,” it’s a real scientist like Rush Holt. How about standing up against this stuff, Rush? You know the math is a joke and what, for example, NJDOE is doing with AchieveNJ is innumerate. Stand up and say so (if you have and I missed it, I apologize).

Well, perhaps the Jazzman is getting Representative Holt’s ear! Because Holt’s campaign blog features a new post from Braun that creates more distance between Holt and Booker on education than we’ve seen so far in this race:

In many ways, public education is under attack,” Holt says.  At a recent campaign stop, he told voters: “I believe in great public schools–in neighborhood public schools. There are some who believe vouchers are a way of providing school choice. Well, in a sense they are. But they are much more a way of taking resources out of public schools.”

One of the candidates in the Democratic primary, Newark Mayor Cory Booker, has been a champion of private school vouchers for his entire public career. Rush has always opposed vouchers. In his campaign website, he says unequivocally: “We must also staunchly oppose those who would take money out of our public schools in the form of vouchers.”

Holt also expressed concern about the growing number of private, profit-making management companies deriving income from public money awarded to charter schools.  While he supports public charter schools, he doesn’t want the children in them exploited for corporate profits. He believes charters can serve as laboratories for experiment and  innovation but were not designed to replace traditional, neighborhood public schools. [emphasis mine]

That’s certainly better, and a direct swipe at the Tisch-backed Booker. And even though this part is a bit ambiguous, I think it’s moving in the right direction:

`We need to find a way to make sure all our children are making progress-and we have to do that without subjecting our children to excessive testing that narrows what schools teach and stifles the creativity of our best teachers,” he says.

“We need accountability systems that help teachers learn how to improve student success-not endless testing that simply assesses what students know in a few subjects without showing educators how they can work together to improve outcomes. We shouldn’t be using high-stakes testing to punish teachers.”

That’s fine… but it still sounds like Barack Obama’s characteristic talking out of both sides of his mouth on testing. Does Holt support Race To The Top, or doesn’t he?

As a Senator, Rush says he will carefully review all programs impacting the public schools, including Race to the Top, a national competition for federal funds that awards money based on compliance with federal standards.

‘The Race to the Top should be an engine of innovation,” he says, “but we must always be  sure scarce educational resources go to the children who need it most.  No  reform program should be used to punish the children we need our help the most.”

Again: maybe a bit murky to someone who’s deep in the weeds on this stuff as I am, but a whole heck of a lot better than Booker. Holt also details his support of something called the METRICS Act, which, to be honest, I don’t know much about. I’m all for data, including using it in teacher accountability measures, but I object to using it in rigid, inflexible, top-down systems like the ones promoted by Race To The Top. If METRICS gets us away from that, great.

Personally, I’m voting for Holt because I like his stands on education the best, and I think he’s the smartest guy in Congress (which is why he’s a progressive). I’d like him to be a bit more forceful against reformyness, but that’s just me.

Whether NJEA should get behind him in the primary is another matter. Personally, I think unions need to stand up more forcefully against bad actors like Booker. But if Holt (or Pallone) can’t show within the next few weeks that they have a real shot at taking out Booker, I don’t know if it’s the politically smart move; especially because Chris Christie is an even greater threat to public education than Cory Booker. If resources are scarce, that’s where they need to be deployed. 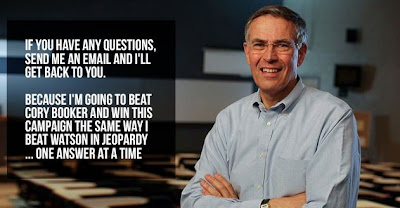