While a rally for sensible gun laws was being held on the National Mall today, a group of about 200 New Jerseyans came to Lincoln Park in Jersey City to rally for similar controls at the state and federal levels. Hosted by Jersey City Major Jeremiah Healy, a slew of Democratic elected officials spoke about how to prevent the next Columbine or Newtown.  While the temperatures were very cold, this did not dampen the enthusiasm of the crowd or the speakers.

Not a single Republican was on the stand. This should not be. Our children’s’ safety and that of ourselves should not be a partisan issue. Just like the Koch Brothers should not be dictating our energy policies, the NRA and their patrons should not be endangering our kids. As with marriage equality, the GOP is simply on the wrong side of history. 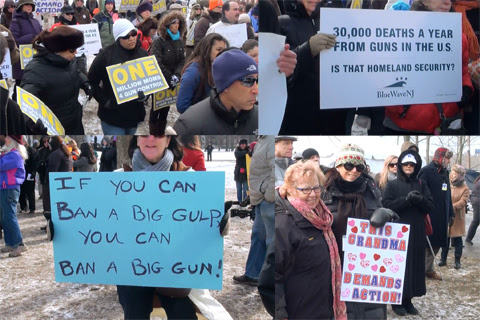