Cryan to Introduce Legislation to Limit Size of Ammunition Clips

Today, Assemblyman Joe Cryan announced that he will introduce legislation to limit the legal number of rounds in an ammunition clip to five. I spoke by phone with Cryan this afternoon to get some of the details. 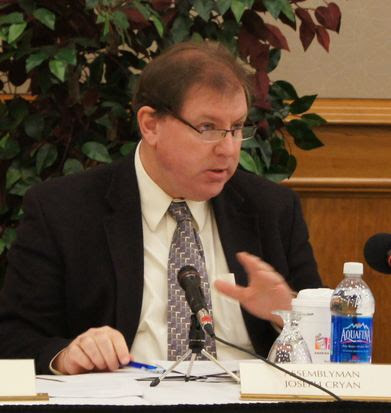 Currently, the legal limit is fifteen rounds and I asked him if possession of clips with that capacity would be grandfathered. He indicated that this would be one of many subjects of the debate as the bill progresses. Already, he said, he has received push back on this simple, common-sense bill from citizens and fellow legislators. But he said, “the whole idea here is to have a reflective debate” in light of the events in Newtown and elsewhere. He recognized the Connecticut teachers as heroes and wants to do whatever can be done to slow down or impede the inevitable shooters of the future.

Cryan indicated that this will be the first in a series of bills that will include addressing of ammunition sales, identification of ammunition, and other related topics – to be introduced in mid-January.

His approach will not only consider sensible gun regulations, but also mental health issues and a good look at the “games that desensitize violence.”

Of course, even if New Jersey implements strict gun control laws, it’s easy to bring in these killing machines from other states. Cryan recognized Senator Frank Lautenberg as a driving force for sensible gun laws across the nation. “We need to have a full discussion” on sizes of magazines and availability of assault weapons across the board. He pointed out that these initiatives do not impinge on Second Amendment rights for law-abiding citizens.

I’m happy that Cryan is taking the lead on this initiative. (Senator Weinberg also wrote about gun control laws in her diary on Monday.) Now, we need other legislators to join them in working to make sure that we don’t experience a Newtown massacre in New Jersey. Cryan’s proposals do make sense, and any legitimate gun owner should sign on and support these initiatives which will protect, not impinge, on, their interests.