NJ Education Commissioner Chris Cerf’s brain must be a remarkable place. How does a person in such an important position manage to contradict himself on the same night?

New Jersey Education Commissioner Christopher Cerf insisted during a meeting with residents last night that he did nothing improper when he met privately with Ward E Concilman Steven Fulop and a small group of residents and school board members last year to discuss issues related to finding a new superintendent, though he later refused the school board’s invitation to do the same in a public meeting.

“If I am invited into a community, whether by elected officials or private citizens, I am happy to meet with them,” Cerf said during a two-and-a-half hour meeting at New Jersey City University. “I’ve done it before. I’d be happy to do it again.”

Cerf also declined Grigsby’s request that he meet with Jersey City parents two to four times a year given the state’s actions within the district. While Cerf did not rule out additional public meetings, he would not commit to as many as four, noting that he is ultimately responsible for some 600 schools throughout the state.

That’s right: Chris Cerf is happy to meet with concerned citizens – except when he’s not.

It’s worth noting that Jersey City is only one of a handful of districts (for now) that are under state control. Plus JC is the second largest district in the state. If that doesn’t warrant a commitment to regular meetings with parents, I don’t know what does; especially since Cerf apparently can decide which subjects will be discussed.

Parent Akisia Grigsby, recalling Cerf’s appearance before the school board in December 2011 to discuss the superintendent search, said his refusal to meet with the public and take comments at that time showed an insensitivity to the community.

“You walked out and you didn’t respect us,” complained Grigsby, who heads the city’s Parent Advocacy Group.

Cerf told Grigsby the board was responsible for deciding to hold the closed session and said he did meet residents before leaving.

Yet it was Cerf who sought the closed session last year to discuss issues classified as falling under personnel that pertained to the search for Epps’ successor. When the board offered Cerf the opportunity to address the public beforehand, the commissioner declined.

It really is an amazing talent to have such a casual relationship with the truth: “Hey, they called for a closed meeting, but I still met with the public!” Except the reporting from the time of the meeting makes it clear that’s simply not true:

Cerf and board members conferred at a special meeting in the board’s central office on Claremont Avenue. The closed session received mostly negative reviews from the citizens present, a group made up of primarily parents and community activists. Some criticized the board for not allowing residents the chance to address the commissioner – the public-comment portion of the meeting was scheduled for after Cerf’s appearance.

And Cerf, accompanied by his chief of staff David Hespe, declined to stay to take comments from the public. He did address two questions from JCI before he and Hespe cut the session short and left.

When he was told that some residents felt he deliberately wanted to avoid hearing them, the acting commissioner seemed unconcerned, saying, “If that’s their opinion, then go ahead and report it.”

Cerf’s decision to leave the meeting rather than address the public brought no clarity to the concerns outlined in his vaguely worded email. One speaker, Jayson Burg, an unsuccessful 2011 school board candidate, told trustees he had come to the meeting expecting Cerf would be willing to share his views with the public.

Asked by JCI if the board’s effort to accommodate Cerf at the expense of keeping the public out for a 90-minute closed session made the board look bad, Vice President Carol Lester would not answer yes or no.

“Acting Commissioner Cerf wished to address the board on personnel matters the law requires us to discuss in closed session,” she said. “But it’s not something I, personally, wanted to do.”

I really don’t think Chris Cerf cares if he is caught in a lie or not. He makes statements without the slightest concern as to whether they are accurate. He abuses data to bolster his ideological views without the slightest hesitation. He creates graphs so dishonest that they would be laughable if the topic wasn’t so serious.

I really do think he just doesn’t care very much about the words that fly out of his mouth. True, untrue? Who cares! The truth has a known pro-union bias anyway… 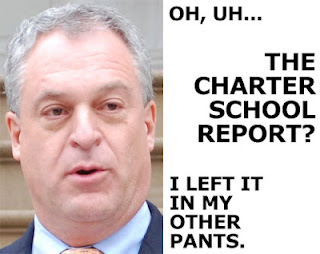