Governor Chris Christie’s claim to fame is not his radical right-wing agenda but rather his reputation as a bully. And while Christie’s name calling, whining, and using taxpayer funds to advance his political agenda are not as egregious as Mitt Romney’s collegiate physical bullying, Christie’s actions nevertheless set a poor example for the children and adults of New Jersey.

Fortunately, within the New Jersey political sphere there’s a counterpoint to Christie’s false bravado – someone who has worked tirelessly to address the real problem of bullying in our schools and society. 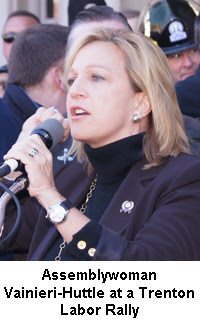 Assemblywoman Valerie Vainieri Huttle (D-Bergen) has led the initiatives that have given New Jersey one of the strongest anti-bullying school programs in the nation. Supported by several co-sponsors, her legislation to require schools’ anti-bullying programs was signed by the Governor, only to be struck down by the Council on Local Mandates as an unfunded mandate. The legislature reacted quickly, appropriating $1 million in the last year’s budget to cover the costs of anti-bullying programs in cases where no other sources of funding could be found. Yet, the current budget does not allocate any funds to the schools for similar programs this fiscal year.

In a recent e-mail exchange with Assemblywoman Vainieri Huttle, I asked her how these important programs would be impacted by this year’s budget.

The Assemblywoman stressed that the intention of the legislation is to encourage schools to use existing resources, while there are other initiatives at the state level to help districts along. This year’s budget includes funding for two staff members at the Department of Education to support schools in implementing the Anti-Bullying Bill of Rights.

In addition, a task force has been formed, with four gubernatorial appointees and three from the legislature, to review the law, identify funding issues and potential solutions, and make recommendations on how to implement these programs. I spoke with one of the task force appointees, who told me that their first meeting will be held later this month. There, they will refine the scope and operating norms for the group and plan the task force’s activities. Blue Jersey will report on the task force’s progress.

Vainieri Huttle’s efforts to combat bullying are not limited to her legislative duties. She’s also sponsored a showing and discussion of The Bully Project, a documentary film about bullying, and will be coordinating a Week of Respect at Bergen County schools in October.

While Vainieri Huttle is a leader in anti-bullying initiatives, she is not alone. Nor is this a partisan issue. Senator Diane Allen (R-Burlington) has introduced legislation to address bullying of students by teachers. Assemblywoman Vainieri Huttle is working with Senator Linda Greenstein (D-Mercer/Middlesex) on legislation to address bullying in the workplace.

Assemblywoman Vainieri Huttle may not get as much ink as the governor. She does the important work for which she was elected in a forceful but unassuming manner. Years from now, the impact of her efforts to improve life for all New Jerseyans will be deemed to be significantly more positive than those of our YouTube governor.