NJ Charter School Mess: How Deep Does It Go?

Some truly outstanding reporting from blogger Darcie Cimarusti this weekend lays bare the absolutely hopeless state of the charter school approval process in New Jersey. Conflict of interest, political favoritism, and incompetence run rampant in the latest chapter of the sage of Cherry Hill’s Regis Academy. Is this the first of many charter school scandals waiting to be exposed?

You may remember that the founder of Regis Academy, anti-Marriage Equity crusader Pastor Amir Khan, is a frequent guest on stage with Chris Christie at his town halls in South Jersey. Christie, however, has disavowed any knowledge of Khan – even when the man was sitting right behind him! 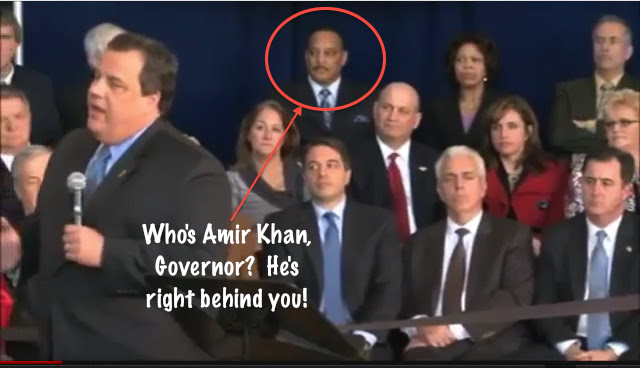 Khan won approval for his charter school to open on the grounds of his church this fall. Khan admitted that the church was counting on the money that the Cherry Hill, Voorhees, Lawnside, and Somerdale school districts would have to pay the charter school – even though these are outstanding districts that do not want nor need a charter.

This week the Edward Colimore of the Philadelphia Inquirer reported that the money Khan is counting on is too little, too late: his church is behind on their payments and will be served an eviction notice by their landlord, the Diocese of Camden. As I noted last week, there is evidence that the Department of Education has instructed its outside charter reviewers to be lax in assessing the financials of charter applications. Had there been better scrutiny of the Regis application, both the shaky finances of the school and the clear conflict of interest in having the founders pay themselves rent would have been exposed.

But this story goes much deeper. This past weekend, Cimarusti published the minutes of a meeting of Regis Academy’s governing board. In addition to questions about whether the school will be able to maintain a separation between church and state, the minutes include this statement:

We need to be sure that the sending districts are not bringing in children who may cause a great concern for the AYP [Adequate Yearly Progress].  We must make sure that school performance out performs, based on your curriculum.

In other words: Regis is monitoring the students who apply to see if they will drag down its test scores. Considering that ACTING Commissioner Cerf has evaded the question of whether charter schools “skim the cream” by avoiding students who are difficult to educate, the minutes of this meeting are simply stunning.

But it’s hardly surprising Regis and Cerf are in the same page: Cimarusti, in another extremely thorough post, publishes documents she obtained through OPRA requests that show a tight relationship between Khan, members of Christie’s staff, and the NJDOE. The documents completely fly in the face of Christie’s denial that his DOE gives charters to political friends and allies.

Finally, Cimarusti reveals the financial ties that make this charter school so important for Khan’s church. Which begs a question:

We only know about the problems with Regis Academy because of the tenacious efforts of Cimarusti, a group of concerned South Jersey parents and taxpayers, and the Cherry Hill and Voorhees school boards. These communities resent having Trenton tell them they must allocate badly needed tax dollars for charters that are neither wanted nor needed.

The Black Ministers Council (of which Khan is a member) has bragged about their success in getting charter schools approved; but how many of these charters are paying rent to the very ministers who sponsored their applications?

Cimarusti has exposed the many issues with Regis Academy; how many other charters have these same problems, yet haven’t been exposed because the local school boards are either powerless to investigate, or just not interested in how charters spend their funds?

Cimarusti has done outstanding work, but she can’t do it alone. It’s time for the press and members of the Legislature to follow her lead: the NJDOE needs to come clean on its charter approval process, and disclose the financial records of both current and future charters.

Until they do, there needs to be an immediate moratorium on new charter schools. The Regis Academy case alone raises too many serious questions to risk continuing to fund schools that haven’t been vetted thoroughly.