Arguably, the most important function of the state legislature is developing a budget for the upcoming fiscal year.

The governor has already submitted his version with wildly optimistic revenue forecasts coupled with significant tax breaks for millionaires. Budget committees in both houses are in the process of developing plans that meet the needs of the citizens of New Jersey.

The third and final session of state-wide hearings of the Assembly Budget Committee, aimed at hearing from the public, was held today in Camden.  Committee chair, Assemblyman Vincent Prieto and committee members listened to the testimony from a diverse set of interests.

The meeting was kicked off by the obligatory set of local dignitaries starting with William Thompson, the Vice President of Camden Community College which hosted the meeting.  He was followed by Camden Mayor Dana Redd and local Assemblyman Angel Fuentes.

Many of the agencies and groups that testified were asking to restore funding to the pre-Christie levels, even with the increase in demand for services. Over the last two years, the governor has slashed many social service programs to the point where they are laying off staff and denying services to the most needy.

Linda Kirschenbaum of the Court Appointed Special Advocates of New Jersey (CASA) talked about how her group’s 2010 funding was cut by 25%. She says her group’s efforts save the state $3.9 million a year by placing children in loving homes more quickly, and asks to restore funding to the FY 09 level of $1.1 million.

Justice Wallace (at microphone). Behind him is Melville D. Miller of Legal Services of New Jersey

John Wallace, the Supreme Court justice who was fired by Governor Christie for political reasons, testified for Legal Services of New Jersey. Under the Christie administration, its staff has shrunk from 720 to 415, and so it is less able to assist poorer citizens with issues like home forclosure and child support.

The most spirited discussion occurred when Kathleen Davis of the South Jersey Chamber of Commerce came to the testimony table. Not surprisingly, the Chamber supports the Governor’s budget, pension and benefit “reform”, and reduction of regulations that protect the environment and consumers. Committee members from both sides of the aisle used this testimony as an opportunity to promote their party’s budget approaches while “asking” the witness her group’s opinion on things like the millionaires’ tax and tax breaks for businesses. When asked by Chairman Prieto why the Chamber opposes restoration of the millionaires’ tax, Davis did not answer.

One of the mainstays of these budget hearings has been testimony from Dr. Lawrence Ragone, who runs the South Jersey Eye Center in Camden. It is an organization that provides much-needed eye care to residents in the region who would otherwise be unable to afford it. Dr. Ragone is a senior citizen, so you can imagine the murmurs when Lawrence Ragone, who signed up to testify, appeared to be a much younger man. It turned out that the person who spoke was Lawrence Ragone III (pictured), the grandson of the South Jersey icon. Under Governor Christie, the center’s entire state allocation of $350 thousand was slashed, and the younger Ragone asked the committee to restore $200K to allow them to continue to provide vital services to South Jersey residents.

Another victim of the Christie cuts has been scientific and engineering innovation in the state. Suzanne Zammit (pictured) of the New Jersey Business Incubation Network pointed out that her group has helped start 59 self-sustaining companies, but the network is losing matching federal aid due to the state’s cuts. It seems to me that if the administration is truly concerned about creating high tech jobs, the state should be doing all it can to foster the innovation and growth that helps spawn those jobs.


Of course, no hearing on the Rutgers-Camden campus would be complete without mention of the unpopular takeover of the institution by Rowan University.

Although Chairman Prieto mentioned at the start of the hearings that this was beyond the scope of the budget committee, several speakers pointed out the lack of fiscal due diligence in the proposed “merger.” Neil Wise, a former senior manager in the Federal government and now a career counselor at the Rutgers Law School, pointed out that the transition costs are not accounted for. A similar point was made by Hyun Kyu See, a Rutgers student (pictured). Vibiana Cvetkovic, a Rutgers reference librarian, agreed and urged that those promoting the “merger” provide a solid financial plan. When questioned by Assemblyman Schaer as to why the average time to graduate is six years, Cvetkovic pointed out that Rutgers-Camden has a large percentage of non-traditional students, many are commuters, and a large number attend school part time while holding down full time jobs. 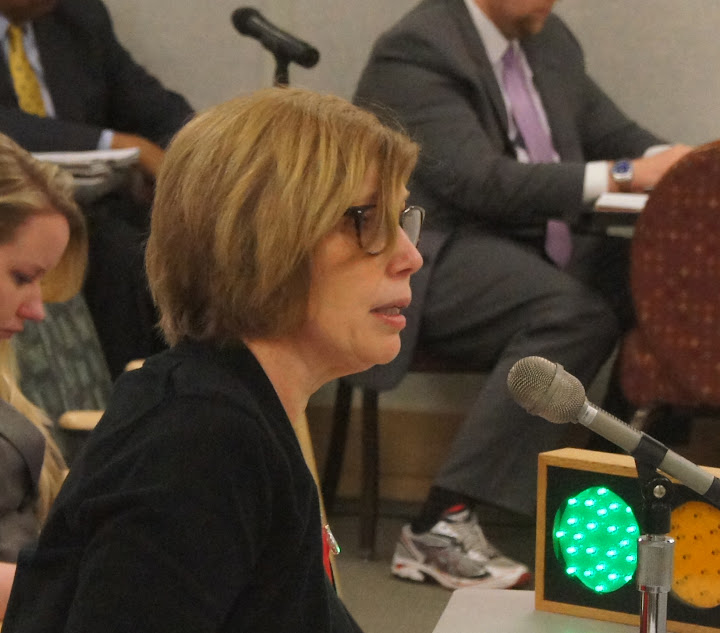 Another aspect of Christie’s failures has been in transportation infrastructure, and this was borne out by the testimony of Janna Chernetz of the Tri State Transportation Campaign. Not only did she talk about better funding for mass transit like NJ Transit, but she also advocated small amounts of funding for pedestrian and bicycle safety.

I’ve only written about a third of the folks who testified. It will be interesting to see how the budget process plays out. Last year, Christie ignored the poor and middle class; with his line item vetoes being sustained in the override vote on party lines, the governor was able to balance the budget on the backs of the most needy. Now that the election season is coming up, will Christie continue to coddle the rich while ignoring the majority of New Jeseyans? Will the DINOs in the legislature bow down to Christie and his benefactors? Or will the Democrats insist on an approach that is both business-friendly and people-friendly? Time will tell.