Ruby at the Crossroads: In which I meet a hero of mine 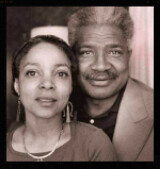 From the 2012 Blue Jersey Archives. Ruby Dee, who was revered in my household growing up in the civil rights movement as was her husband Ossie Davis has just died. I met her family when she was 90 and came to see her son Guy Davis do his theater piece at the Crossroads Theater. They treated her like she was fine glass, a treasure. She was. I loved talking with her that night. But it wasn’t the first time. I spent an afternoon with her a long time ago. That story, below. Reposted from 2012. – REE

I met a hero of mine – or rather, I re-met her after many years. Civil rights advocate, artist, and a woman whose picture my parents posted outside my bedroom door when I was little, as somebody to look up to. Wife of the emcee of the 1963 March on Washington, where Martin Luther King said “I have a dream” and the eulogizer of Malcolm X. Mother of my favorite blues man. Follow me to the jump and I’ll tell you.

Blues man, musicologist and master storyteller Guy Davis is at the Crossroads Theater in New Brunswick this week in The Adventures of Fishy Waters: In Bed with the Blues. A one-man musical theater piece it took Davis 20 years to write, it’s a glimpse into what it was like to be poor and scrapping in the hard times, somewhere in America. For me, there was an added dimension, seeing this played out just days after Chris Christie’s historically ignorant claim that the civil rights movement could have been resolved by referendum. Stories in this one-man play make pretty clear what the racial realities of the 20th century were.

We take note of Black History Month every year when February rolls around, which allows some of us to forget that black history is American history. Crossroads Theater, my favorite theater in NJ because its artistic choices are so interesting, celebrates it every day. Crossroads, along Theater Row in New Brunswick, is dedicated to the culture, history, spirit and voices of the African Diaspora. Beat that with a stick.

Davis creates a character called Fishy Waters, a hobo living a boxcar life with just enough to get by and a guitar (out of which he charms music) and harmonica (into which he breathes the sound of barking dogs and squealing pigs) to entertain himself and his circle of traveling friends with (in the performance, we’re his friends and Davis breaks the 4th wall and engages directly with the audience, cracking wise and handing out booze). Fishy is the kind of guy who pours a little hooch in a tin cup, then hands you the cup and drinks from the bottle. Nevertheless, this is a working man. He explains the difference between a bum and a hobo; a hobo works, and a bum doesn’t. “And you’ve got bums living in fine houses with fine jobs … and running for political office.” Worn pants. Scuffed shoes. Chambray shirt. Vest. Porkpie hat and work gloves hanging out of his back pocket. Davis sings songs and tells stories of where songs come from (his musicology is fun, and illuminating). Hard times. Depression-era America. And black men weren’t safe. Some of Fishy’s stories – and here the intimate theater goes dead quiet – are about young men hanging from trees like fruit. Memphis. Dallas. Savannah. You ain’t welcome by day. Don’t get caught at night.

Guy Davis has the gravel in his voice his father had. And that brings me to the other reason I came to opening night last week. Davis’ mother, the actress Ruby Dee, was coming.

I met Ruby Dee many years ago. When I was an organizer for NYPIRG I had consumer advocate Ralph Nader at my disposal to generate a crowd at any college I was organizing. The first time I brought Nader in was to Bronx Community College. I was green, hadn’t met him yet and was terrified I’d screw it up. So I got there very early to talk to the stage manager at the theater where he was to speak. Thinking I’d have the place to myself, I was a little rattled to walk in and find the stage occupied by an orchestra in full rehearsal. Tito Puente, the full orchestra, and Celia Cruz out in front. And sitting in the only theater seat occupied, a beautiful woman of erect bearing; Ruby Dee. She was hosting the show, which would take that stage an hour after my lecture with Nader was done. She took one look at me and decided I needed help; with the rehearsal still going she walked me back to the stage manager and in 5 minutes set me up with the lighting and timing our lecture needed.

Then I got to spend the whole rest of the day with her, meet Puente and Cruz and the players, talk about people we knew in common (my parents knew some of her friends) and talk about education and voting rights, chatter happily and munch on the lunch she brought in for us. I never forgot her. But in my young New Yorker’s blasé disposition, I never told her I grew up with her picture posted across from my bedroom door; my parents’ doing, so that I would start every day looking at some of the people I might grow up and be like. If you knew the whole constellation of who my parents posted for me to consider, you would know a lot about me – and my parents. Ruby Dee and her tall, deep-voiced husband Ossie Davis were two, and they have been among my favorite players, and people, ever since.

Guy Davis grew up in a house of lively minds and great storytellers, among them Ruby Dee’s father Marshall and his own father Ossie. Miss Dee, who last appeared at Crossroads with both her husband and son in a play they wrote in 1995, was a guest Opening Night of Fishy Waters last weekend. She was very warmly received, and formally recognized by the local NAACP to standing ovation. A seat in the first row – #103 – bears her name and Ossie Davis’. This time, I dropped the affectation of not gushing at well-known people and sat down with Ruby and told her my parents hoped I’d consider her and Ossie as I pondered my own future. She liked that and talked to me for a while about how much Ossie would have loved this show, and this night, as we watched Guy Davis circulate in a champagne reception in his honor. And she told me that when he was little, she wanted Guy to take piano lessons, but he was resistant. Ossie urged leaving Guy to his own devices. And he went off to camp to study guitar with Pete Seeger’s brother Michael, and Pete. And now is a master of the guitar himself, who sang with Pete Seeger at his 90th Birthday Concert at Madison Square Garden.

The Adventures of Fishy Waters: in Bed with the Blues, Guy Davis’ one-man show. There’s a show tonight, and matinees and evening shows this weekend. And then it’s gone.