You are Paying for Christie’s Propaganda

It has always bothered me how much of my tax dollar is being use to promote Chris Christie’s image and his draconian agenda. 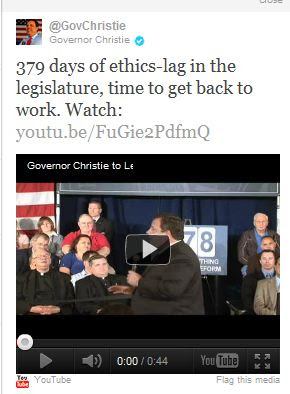 I decided to submit an OPRA request to learn how much of my money is going toward his self-aggrandizement. One of my friends has had limited success with OPRA and has told me that the office that handles these requests uses obfuscation as their default position. But after I attended an OPRA seminar, I was emboldened and decided to try out the system.

The response I received (which includes my original request) is here. It doesn’t entirely answer my question, but it provides a window into the workings of the Christie communications machine.  It shows that we are spending $55,000 of taxpayer money to promote the Christie agenda. Actually, the number is much higher because this figure does not include the costs of the benefits to the individual named, the cost of the IT infrastructure, and any travel expenses for the Governor’s Twiterrer. And I inadvertently neglected to include the much larger YouTube expenses in my original request.

Certainly, the governor has the right – and the obligation – to use social media to communicate with his subjects. But a large amount of what his people post is political and should be funded by the State GOP, not the taxpayer.