I’m Not Sure I Can Hold My Nose This Time

Multiple attempts to reach out to state representatives without ever a response? What could possibly be your reasons, Senator Madden? Assemblyman Moriarty? Assemblywoman Mosquera seems to have a chance here to do better with this constituent than her colleagues. – promoted by Rosi

It seemed like a simple question to me. A question I posted on the Facebook page of the Democratic NJ State Legislature candidates for the 4th Legislative District.

Senator Fred Madden and Assemblyman Paul Moriarty are incumbents. Gabriela Mosquera is a newcomer, running for the seat formerly held by Republican Domenic DiCicco, who was redistricted out of LD-4 in April.

I have written to my state representatives numerous times on a variety of issues, both state and local. Never once have I ever received a response, not even a form letter or a robo-email, from Madden or Moriarty. Mr. DiCicco, the Republican, has personally responded to me, as has Governor Christie. I even got a phone call from a Christie staffer responding to one of my letters.

Madden and Moriarty are also among the “Christiecrats” who sold out the public unions on pension and benefit “reform” (why does that now sound like such a dirty word?).

Back to my question one the Facebook page. In response to a post boasting of Mosquera's endorsement by the Women's Political Caucus, I wrote:

“Ms. Mosquera: If elected, will you legislate in accordance with progressive Democratic principles, or will you vote in lock-step with the Sweeney/Norcross Christiecrats, like your running mates?”

It's always a good idea to do a screen grab when making a comment in a political forum, just in case it gets removed. Governor Christie's Facebook page is regularly scrubbed, as are many other politicians' pages. I posted this comment on a Friday morning, checking back regularly to see if there was any response. By Saturday afternoon the comment was gone. No response. No refutation of my “Christiecrat” labeling. No comment. No email. No phone call. Nada. Nothing.

Now, I don't begrudge these guys the right to scrub their Facebook page. After all, it's their page. But if they want people to vote for them, pissing me off is not a good idea.

Being a Democrat has been baked into my DNA since birth. My parents and grandparents were Democrats (although my Dad now calls himself a “libertarian”, but that's a whole 'nother story). We were New Deal, New Frontier, Great Society Democrats. I could not imagine myself voting any other way.

But, considering the absolute lack of interest in any type of constituent service on the part of these two, to never once respond to a constituent's concerns, and their unsatisfactory voting records, is there any compelling reason why I should hold my nose and vote for them?

Yeah, I know, the 11th Commandment, “Thou shalt not speak ill of your fellow (Democrats)“, but these two make it nearly impossible.

So, help me out here. On November 8th, two things I will not do is stay home or vote for a Republican. But what should I do? Do I hold my nose and vote for two individuals I have absolutely no respect for, or do I write my own name in (as I did in the Primary), or do I vote for the third party candidate?

What would you do? 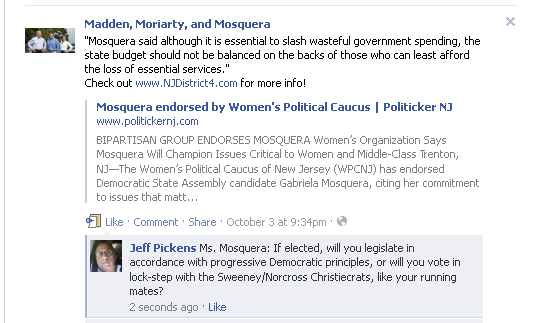