As the income tax season wraps up, if you are a New Jersey taxpayer, congratulations! You just contributed to Republican Governor Chris Christie’s political coffers.

“Wait!” you say. “I never checked the box on my tax form to do that. Besides, I would rather suck on a lemon than contribute to His Arrogance.” Too bad.

Much has been written about how the governor is using taxpayer funds for his political rallies ostensibly labelled as “town hall meetings.” Assemblyman Paul Moriarty has asked the governor to reimburse the public for the expense of these rallies. These meetings are held during the day, when most middle class people work, and are filled with Christie acolytes. Once in a while, when a person with a dissenting opinion manages to ask a question, that person is ruthlessly lambasted by the governor – hardly an environment conducive to civil policy discussion.

Yet, the governor relishes these confrontations. He calls them “YouTube moments.” Now, he’s taken this illegal use of taxpayer funds to a new level. His New Jersey GOP is using these videos to raise funds. Its web site features a survey, “Vote for your favorite Chris Christie Moment,” featuring five videos from which to choose. In order to vote, of course, you have to donate to the Republican party. Interestingly, none of these videos has anything to do with policy. Four of them denigrate Christie’s opponents (teachers, unions, the media, and a critic of another Republican candidate) and one is the woman claiming Christie is “hot and sexy.”

Christie has opted for style over substance. Maybe that’s because the substance of his policies, when critically examined, only supports his cronies – the “haves” and his buddies. And while his style is childish and bullying, his use of my tax dollars to promote his image is apparently more effective than the lack of substance in his policies. 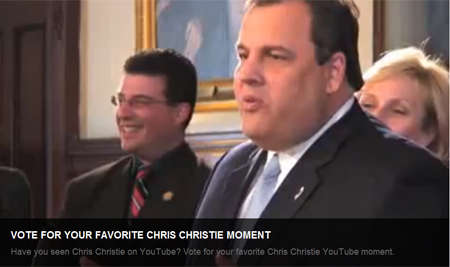