That’s the money quote from New Jersey Board of Public Utilities President Lee Solomon at the NJ/PA Sustainability Forum held on the campus of Rutgers University in Camden. Solomon was the opening speaker at the day-long event.  more below…

The former assemblyman, judge, and Deputy US Attorney under Chris Christie’s regime in the Justice Department reviewed the state of energy in New Jersey primarily through a business lens. Because New Jersey is not a manufacturing state, energy is second only to labor as a cost to the state’s businesses, and he asserted that those costs are not competitive with neighboring states or across the nation. And although New Jersey’s Energy Master Plan is still being worked on, three new power plants were approved which he claims will benefit ratepayers to the tune of two billion dollars. 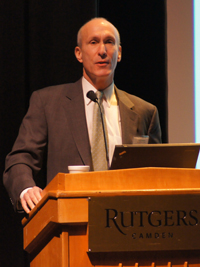 Solomon cited the nuclear accidents at the Fukushima Daiichi plants as one factor in the delay of the Master Plan. But since New Jersey receives over half its electricity from nuclear generation, he said that continued reliance on nuclear will be the only way the state can meet federal carbon emission requirements. His approach is to provide incentives to private investment, especially in reducing the traditionally long payback time. Profit-minded companies tend to look at the bottom line on a quarter-by-quarter basis, but traditionally investments in energy tend to be recouped over decades. His quick-payback investment approach sounds good on paper, but does it transfer the risk from the investor to the taxpayer?

New Jersey is in the forefront in exploiting renewable energy – solar and wind – and Solomon says incentives to entrepreneurs and established companies in those areas should continue. One of the problems with renewable energy sources is the variations in their availability. The sun must be shining and the wind must be blowing. Solomon predicted that some day, not in the immediate future, we will come up with an energy storage system that will allow temporal displacement of energy produced by renewable methods.

The technology revolution has increased the demand for electrical power, and the growth of the nascent electric car industry will add even more stress to the production and distribution of electricity. Solomon specifically cautioned that the power distribution system in the southern part of the state is insufficient to handle the influx of electric cars.

Development of alternative energy sources is the new Gold Rush. Over the next decade, our energy paradigms will undergo radical transformation. Improvements in battery technology, economies of scale in renewable energy, and the slow but certain weaning from fossil fuels will all be factors. There was no mention of consumers and energy affordability in Solomon’s remarks. Let’s hope the much-delayed Energy Master Plan recognizes the paradigm shift, and that the voice of the consumer is not drowned out by the business-friendly Christie administration.