I’ve Never Been Among So Many Heroes at One Time

Last week’s rally in Trenton was soggy. Today’s was downright cold. But for anyone standing among thousands of firemen, police, corrections officers, emergency response personnel, and even a handful of supporting teachers, the atmosphere was electric. Speakers were union leaders and just about any Democratic politician in the State House – with one exception.

You would think that this crowd would portray Chris Christie as the bogeyman – and you would not be disappointed. But the overriding theme was expressed in the repeated chants of “Where’s Sweeney?”

Senate President Steve Sweeney’s capitulation to the anti-union interests was foremost among the concerns of the endless sea of blue uniformed men and women in front of the State House.

The photos tell the rest of the story.  Click here for more photos. 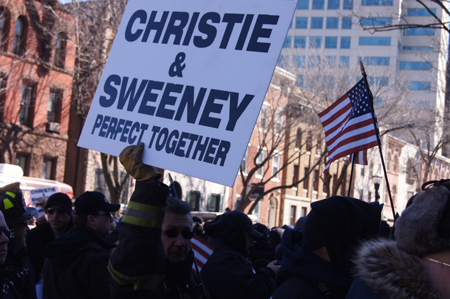