The Wind Beneath our (Economic) Wings

Generation of electrical energy from wind is not strictly a disruptive technology because it will not totally replace fossil fuels (at least in the near term), but it does hold the promise of clean energy while reducing our dependence on dirty fuels like coal, oil, and uranium.

Like other disruptive technologies, offshore wind power has its naysayers. The most notable and dangerous are the Koch brothers – dirty-energy barons who covertly fund anti-wind lobbying groups and tea party organizations. The promise of offshore wind energy threatens their cash cows in the polluting-fuel business. But the Koch brothers are not alone. Some environmentalists and naturalists oppose large windmills because of their danger to avian life and their perceived blight on the natural beauty of our environment. Some in the marine industry oppose offshore wind turbines because they claim they may interfere with shipping and sea-based food industries.

So who would think that the first offshore wind turbine would be spearheaded not by PSE&G, not by a high-tech company like Google or GE, but by a bunch of fishermen from New Jersey? Yet it’s about to happen.

A wind energy forum in Trenton brought together state regulators, wind energy entrepreneurs, environmental advocates, and people who make their livelihood from the seas and waterways of New Jersey. At the forum sponsored by NJ Spotlight, about 100 people gathered in the Masonic Temple to hear from experts in the field. 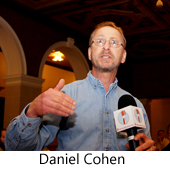 Among the audience was Daniel Cohen, a Cape May resident and President of Fishermen’s Energy. His company represents fishermen who operate a total of about 100 vessels. They have decided to embrace rather than fight the inevitable emergence of energy from the wind. Cohen pointed out that New Jersey fishermen have a vast knowledge of the idiosyncrasies of the Atlantic Coast and can use that experience to assist in the construction and operation of offshore wind turbines.

Cohen’s organization has submitted a proposal for a wind farm 2.8 nautical miles off of Atlantic City and expects this to be the first operational offshore generator by next year. Although smaller in scope than the mega wind farms proposed by the larger energy providers, Fishermen’s facility will go a long way in proving the concept and technologies in offshore clean power generation.

While Cohen was not a panelist at this forum, his initiative was referred to several times.

The formal discussion was led by Tom Johnson of New Jersey Spotlight. Panelists were (from left to right in the photo)::

The event was co-sponsored by three companies involved in offshore energy development, and not surprisingly there was great enthusiasm for the potential of wind energy.

The emphasis among the panelists was the potential for creating jobs in New Jersey while solving the environmental problems caused by fossil fuels and our dependence on foreign countries to provide our fuel supply. Not only would these jobs be in the construction and operation of the windmills, but also in industries with a high demand for cheap energy. The advantage of wind is that planners can count on the energy price to be constant and not fluctuate based on the vagaries of Middle East politics.

Building scores of windmills offshore is not just a matter of dropping a bunch of turbines in the ocean. The decades-old neglect of the American maritime industry leaves us with a dearth of vessels that can be used in construction and maintenance (by law, US-flag vessels must be used.) And the electricity generated must be integrated into the PJM grid. (PJM is the entity that runs the electrical grid for 13 eastern states.)

This is where Atlantic Wind Connection (which is partially funded by Google) comes in. It is a private-sector group doing what should have been a federal initiative years ago, building an offshore infrastructure for power distribution that will be connected to the PJM grid. Integrating the various energy producers along the Atlantic seaboard makes the availability of wind-produced energy independent of wind variations across any specific geographic area.

The panelists all agreed that New Jersey’s government is very friendly to offshore wind energy businesses and has been for many years. We are now at the point where the planning and permitting phases are almost complete, and will start to see renewable energy generated in the next couple of years.

What has it taken so long? The technology, while relatively new, is not in its infancy. The panel pointed out that during the energy crises of the last few decades, while Americans were wringing their hands, Europeans were doing something to reduce their dependence on the Middle East. One panelist mentioned that Europe is “light years ahead” of us in exploiting offshore wind. The UK currently generates one gigawatt of wind power (a gigawatt is 1,000 megawatts and one megawatt of power serves about 800 homes) and is on track with a job-creating project to reap 32 gigawatts. Consequently, turbine manufacturers and other companies that produce wind power generation equipment are flocking to England and setting up shop there. If New Jersey can become the wind producing “Silicon Valley” of the Atlantic Seaboard, we can similarly create thousands of jobs.

It is wise to invest in renewable sources like wind and solar. They are the only viable sources of energy that don’t pollute or leave behind toxic waste. Right now, they are perceived as more expensive than fossil fuels because the technology is still maturing, and economies of scale are not yet being exploited. But if you consider the hidden cost of fossil fuels (like adverse health effects due to pollution and  the yet-to-be solved but bound-to-be expensive problem of nuclear waste), the economic case for wind and solar becomes more attractive. That’s where the government – state and federal – should provide incentives for future development.