While the transformation of legacy journalism is a work in progress, one thing is certain – the days of dead tree newspapers with hard-hitting in-depth reporting are over. The traditional business model that worked so well for newspapers over the last century is no longer viable. Corporatization of print and broadcast media has left the industry with decimated budgets, fewer and fewer beat reporters, and an emphasis on what sells rather than what’s important. So what will the world of journalism look like in New Jersey in the 21st century?

One component of the new journalism will be hyperlocal news reporting – targeted toward a small geographically close audience to serve a particular community and facilitate citizen involvement with community and government affairs. Hyperlocal news outlets have been around New Jersey for a while like the ones here and here.

Rosi and I attended a kickoff meeting for the New Jersey Hyperlocal News Association (NJHMA) on the Rutgers New Brunswick campus today. Going into the event, neither of us knew quite what to expect or whether Blue Jersey’s readers could benefit from the work of this organization.

The event was sponsored by Citizens’ Campaign, a group that promotes itself as working “to cultivate a culture of service and develop a new generation of leaders – leaders who put service over personal gain”. The meeting was introduced by Harry Pozycki of Citizens’ Action and he was followed by Michael Delli Carpini, Chair of the NJHMA Advisory Board and Dean of the Annenberg School of Communications. Delli Carpini spoke about the relationship among the crisis in journalism, the decline of civic participation and civil discourse. Delli Carpini pointed out that good journalism is a critical component of how democracy is supposed to work in the United States, and that hyperlocal news is an essential element (but not a panacea) in resolving this crisis. He enumerated four benefits that could accrue from an organization like NJHMA:

Following this, there was a panel discussion focusing on municipal reorganization meetings. This topic was chosen because in many local government entities, these meeting s are held in January and set the budget, goals, and expectations for the entire year.

The panel consisted of

Cupani, a former municipal official, reviewed the nuts and bolts of the reorganization meeting -what to expect when covering such a meeting and what usually happens behind the scenes. Malinconico discussed the tools that journalists can use to gather information, and Mayor Hawkins presented the view from the inside. (The entire meeting was videotaped and can be seen here).

Professor Jeff Jarvis was the keynote speaker.  He is the Director of the Interactive Journalism Program at the City University of New York (CUNY). Jarvis likened the emerging model to an ecosystem, pointing out that the single big newspaper will be replaced by a conglomeration of different types of reporting, distribution, and sales mechanisms. Some of the different models that he is studying (both for-profit and non-profit) are documented here.  He outlined some of the things that a hyperlocal journalist would need: 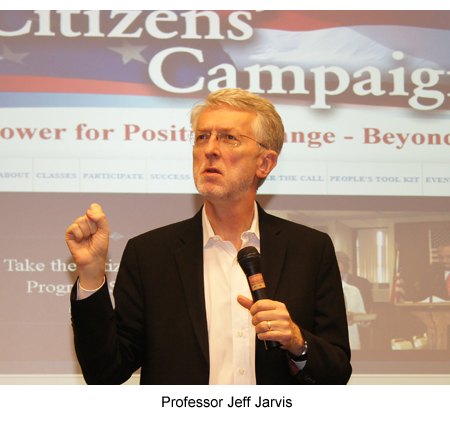 He pointed out that with the threatned demise of NJN, New Jersey has a “unique opportunity” to build a new news structure from the ground up.

One area that is of concern is providing hyperlocal news in urban and disadvantaged areas. Since these areas are typically not attractive to on-line advertisers, Jarvis is worried that some areas may be “red-lined” out of service, similar to what is done by insurance companies.

Overall, this was an educational event for me – I was not aware of the breadth and depth of some of these hyperlocal news outlets, nor was I aware of the challenges they face.

So, Blue Jersey readers – what do you think?  Can hyperlocal news work in your community?  Will it help with citizen involvement?  Can small, local outlets be effective in investigative journalism?  Is there some potential for synergy between Blue Jersey and hyperlocal news outlets?  What other ways will news be developed and distributed in the 21st century?